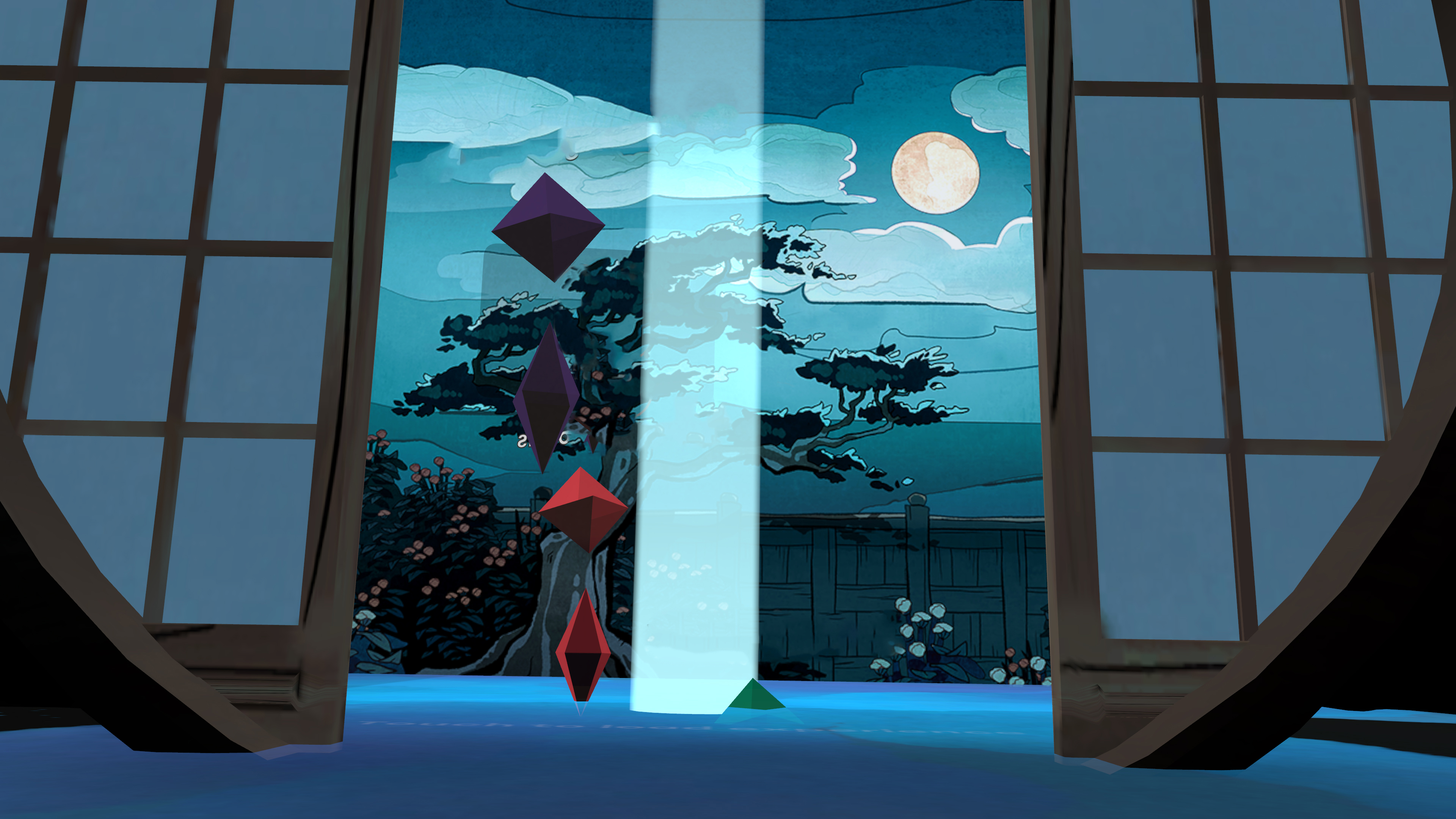 Virtual attendees standing by The Book of Distance exhibit in the MOR. The experience was written and directed by Randall Okita.


In June of pandemically-skewed 2020, I decided to go deep diving into the Cannes XR Virtual showcase; a collaborative Event from five key partners: Marché du Film, the Museum of Other Realities [MOR], Tribeca, Kaleidoscope, and Veer VR. While I had grand plans to review the entire curated exhibition of immersive entertainment hosted in the MOR, time did its usual thing and I found myself running out of it, with the Exhibition space accessible only for the three days of the event [June 24th to June 26th].

On first entering the MOR foyer, one could see that the effort required to create such a space [and recode the existing VR Museum] was evidently made. The "follow-the-yellow-brick-road" approach to navigation [or in this case, “teleport-across-the-red-carpet”] could successfully build anticipation for the content to come. On entering the nexus of the Event wings, the realisation hit how each individual arcade/wing was built on an Escher-like construction plan. For instance, on approaching the end of the Tribeca Virtual Arcade the option to teleport directly onto the wall presented itself. On teleporting sideways onto the wall, a Penrose Stairs-like teleportation trek could be initiated to enter the other gallery wings, with the floor becoming the ceiling and vice-versa. The result was pleasingly mind-bending - to say the very least.

My Experience of the Showcase
‍

During my deep dive into the Event, I wanted to experience as many of the Cannes XR Virtual experiences as possible. The majority of the immersive works that I did experience happened to be from the Tribeca Virtual Arcade. What follows is a summation of some of the works on offer in the Tribeca wing and some others:

• The Line: A Linha [aka The Line] was an absolute wonder, a gorgeously realised and poignant clockwork-puppet love story traversing the stitching of emotional connection, the perils and joy of change, and the power of taking a path less travelled. In short, this work is highly recommended. It’s also been announced since the Cannes XR Virtual show that The Line: A Linha is now a 2020 Emmy Finalist in the 'Outstanding Innovation in Interactive Media' category.

• The Book of Distance: a gut-wrenching retelling of the terrible realities of the Canadian Japanese internment camps as told by the point of view of Randall Okita [as in a physically embodied VR “sketch” version of him at least] concerning his interred Grandfather. This stunning VR Experience is much more than just a simple retelling however, with archival documents and historical footage realized in a brilliant combination of 2D and 3D to flesh out the life story of an adventurous 15-year old Japanese Yoneso, who in 1935 leaves his Hiroshima home to journey to Canada, where his life unfurls into tragedy, loss, survival, and family-building. The interactive elements encountered operate as sublime narrative anchors, so much so that when interacting with certain letters and photographs I found myself bawling in my Vive headset [which was a challenge in itself to negotiate]. Put plainly: find a way to experience this beautiful, heartbreaking work.

• Virtual Becomes Reality - A Stanford VR Experience: An informative [if somewhat dry] VR tour through what the Stanford team has been researching in the field of VR, including their vision of how VR can change society for the better. Unfortunately, this tour illustrates just what powerful storytelling can do as opposed to a straight factual approach: the straightforward information and fact-based interactions in A Stanford VR Experience came across as stilted and clunky after experiencing the wonderfully story centric The Book of Distance.

• Gravity: An odd tale of two brothers falling through space in an exploded world. The room in which it was exhibited in the MOR was beautifully stark in its bare toned simplicity, and this minimalistic slant was reflected in the actual experience itself to great effect. It was a shame, then, that the interaction mechanics used in Gravity VR felt more like an afterthought, with the potential of the plot promising more than the actual realisation of it [even with the choose-your-own-adventure-ish ending fork and gorgeous visuals/spatials].

• Icarus: A lovely VR work-in-progress that reworks the Greek Icarus myth into a quasi-operatic, demoscene-like spatial medley. I thought at first that this must have been the same team that crafted one of my favourite XR works [a VR music video called Surge] with Surge overtones percolating throughout in both the [initial] musical style and visual aspects. Turns out I was wrong though, as the team behind Icarus is actually a co-production between Lemieux Pilon 4D Art and Normal Studio.

• Mary and the Monster: A boisterous reimagining of the Frankenstein story [and its origins] with the emphasis centred firmly on Mary Wollstonecraft Shelley - as both an author and an embodiment of a [not so] monstrous other. A rollicking good meta-take on a familiar melodramatic tale, with a well-earned hat tip to both traditional stage production and the dollop of black comedy tinged with feminist-accented historicization [I loved it!].

• Minimum Mass: On entering the area housing this work [which was one I was most anticipating due to its tendril-creeping beyond its allocated exhibition room] I was confronted with a message stating that the experience wasn’t available due to tech difficulties. So, like any good curious [and stubborn] XR-boffin I went for a file-dive and [on having found the relevant .exe file] did a manual playthrough instead. Even though I’m sure I didn’t get to experience the work in its entirety, what I did find were intriguingly novel interaction mechanics supporting a haunting narrative centred around miscarriage, emotional ties, and the unavoidable weight/consequences of grief.

• Alexa, Call Mom!: A strange exhibit that was the first work that didn’t require activation by touching an MOR entry portal. The work bills itself as an: “...interactive IoT installation about grief and love where one user explores Alexa’s channeling powers as a spiritual medium. Due to social distancing guidelines, we are presenting this virtual teaser in lieu of the physical installation.” I wasn’t sure if the work itself didn’t activate correctly or if there was a problem with the MOR setup, but I couldn’t get past the introduction with it unfortunately replaying again and again with no progression past that point.

• In Event of Moon Disaster: An ingenious story-riff on the Apollo 11 moon landing, and what could have happened if the mission hadn’t gone as per plan. With a liberal dose of ‘beware what you watch’ warnings thrown in and a mixture of [possibly] ARG-inspired real and faked footage [created in part with the use of Deepfake tech] the story is a clever mockumentary, told from a 50’s-ish squat brown TV, with a speech that Nixon would have delivered if things had gone awry with the landing.

• Fly: An evocative educational take on the history of human flight from Leonardo da Vinci’s attempts to a futuristic “Speedbird” hypersonic jet. Although the pacing here seemed a tad speedy for the impact of the lovely interactive moments to sink in, there were moments that were incredibly evocative. From taking the controls of the Wright brothers first plane to guiding a 1969 Concorde, the immersive snippets encountered in Fly were a distinct highlight.

• Violence: This controversial Cannes XR Experience may have deliberately been designed to invoke associations to do with helplessness and powerlessness in the audience in order to fully empathise with the fictional VR character, and to acknowledge the overall social realities of the BLM movement. On my first playthrough the sensation of being unable to discern the locomotion mechanics [to help the VR character break the panels] was jaw- clenchingly frustrating, though that could be the exact point? Also, on a second playthrough [after researching the mechanics] the limitations of the virtual chaperone boundaries only allowed me to partially break a small number of the panels, before [I ironically] punched the wall of my actual physical studio. Violence also left me wanting to know more about the research methodology behind the study associated with this incredibly visceral and reverberating work [as well as needing to check my privilege on so many levels].

• Blood and Chocolate - A Variation on Queerskins Ark: Being familiar with Queerskins and its heart-rending story, I was massively keen to see this second chapter. Queerskins: Ark manifests in 360 video form and I immediately gelled with the exhibition room - with all its familiar text-threading [a technique used extensively in our All the Delicate Duplicates]. Filled with encompassing audio, volumetric spatials and elegant balletic, this work is an intimate animation of a velcroed-in-love dancing couple. I’d say that the 360-video variation of Queerskins: Ark doesn’t disappoint.

• The Great C: For a work that’s a few years old, it’s a cinematic VR feature, astoundingly striking as an experience - one that presents as an accomplished spatial film. Surprisingly, the lack of interactivity in The Great C actually adds to build immersion due to its subtle and innovative crafting, while the risk it takes with locomotion/user shifting, scale transitions and spatial ellipsis thoroughly work in favour of the experience. It's a sublime breakthrough experience and earned itself the Cannes XR Positron Visionary Award.