August 5, 2021
Spotlight: Andy Baker on Ascribing Personality to Randomness
by

Based in Brighton, UK, Andy Baker is an artist-developer who has “always been drawn towards more creative ends of tech, and probably the tech ends of the creative world”. For our November 2020 show called Body Clock we had the opportunity to work with Andy, specifically with the mathematical piece Gossamer.

Andy Baker recalls how when he got his first computer ever - at age 12 - it was the IQ spectrum. And one of the first things he did was just draw patterns using little bits of software that drew patterns. And while no one else seemed even remotely interested in it, that might have been what led to an interest in technical drawing at school. Photography, mathematical patterns, and geometry compounded into a certain aesthetic for Andy over time, and led to continued experimentation.

“I think when I started reading up on the advice I give to photographs, it's like don't be too symmetrical. Don't be too regular And I never liked that advice I'd always definitely towards a really formal, you know, dead on dead symmetrical kind of look. I love combining that regularity with broken things like eroded old things. And I think it's that combination of the kind of natural and the organic and the really geometric but that's my happy place.”

Never too drawn to the gameplay element in games, Andy found that he was invested in the world-building that gaming made accessible. He wanted to explore and interpret these worlds, just drive around a city someone made or wander down geometric passages. And discovering VR brought more such opportunities. People were reimagining space for the purposes of wandering around the space. And such space, without gameplay mechanics in place and or a ‘need’ governing the architecture met Andy’s flight of fancy. While architecture might be one way to recognize a confluence of creativity and geometry, computational architecture also comes close - he notes.

Baker's very first VR experience was the early Tuscany demo on the Oculus DK1. And then Google Cardboard came out.

“When you finally tried a headset that was 6DoF, like head tracking, that suddenly made things so much more real, way more engaging, and so much more like actually being somewhere that you couldn't quite believe. I think the very first time I tried 6DoF stuff, it was with my friend who brought his Oculus DK 2 and I played Lucky's Tale, which is a really cute kind of Nintendo-ish platformer. And while playing that was when it first dawned on me that I could lean forward and look behind this fence. And it was just mind blowing!”

Andy Baker’s primary tool is Unity, which has given him the opportunity to integrate almost everything he likes to tinker with - audio, Photoshop elements, 3D modeling and animation assets, code, and time-based sequences.

Gossamer in the MOR

Andy's original intention for Gossamer was that the colors would be more saturated, but the muted colours came to make more sense. A factor that was non-negitiable throughout the experimentation though was that he wanted -- blurry elements, real soft elements, and really sharp details playing off of each other. Finding a nice middle point where one can see a combination of the blurry and the really-sharp-middle-point became the goal. For a reference point, he had in mind that sense of perspective that one may have if they were looking through a microscope with massive depth of field. One iteration of the piece simulated this idea - such that if you moved closer to the piece, it would appear in focus and if you move further away things would get blurry. But that proved to be difficult to control.

The piece was created using a toolset and library for geometric forms. Baker saw the chance to combine that with some lovely political experiments that Keijiro Takahashi (Unity’s Wizard in Residence) had created. The photographic sense of ‘blurriness’ and the  ‘out of focus’ aesthetic was inspired by a beautiful work done in JavaScript a few years ago. Some part of it is based on what it looks like when there is morning condensation and how spider web forms catch the sun. The terrific thing is that it was entirely faked using code and just circles of different sizes.

“I'd been meaning to try and do something similar myself when Keijiro released a really nice implementation. So just one morning, I grabbed that. And I grabbed my geometry toolset. And I tried mashing them all together. And it was just one of those times where it worked. And all of a sudden, I was in bed --  I was doing it all in bed on a Saturday morning -- and I suddenly realized that I made something that I really genuinely liked and would be happy to show to people, and to try and get out there.”

When it came to the audio too, Andy’s friend, James Rampton offered to compose something. Just as a placeholder, he gave a piece (originally a vocal work) that was made up of just two chords. Andy really liked that asked that James compose a similar piece. In the current audio, there are perhaps three chords in three different sections that randomly switch around.

Another friend, Alan Jackson, a sound artist and sound designer, added all the lovely strange tinkly, glasslike sounds that you can hear. And then there was discussion about if an algorithm could randomly change between the different sound elements, and dictate rules for how many elements can be allowed to play at the same time. For the sound to fit in with the visuals they had to be, again, sort of in tandem with the randomness.  The gradual shifts in the visuals are such that the three shells change at different intervals with different speed settings. Gossamer will indeed be doing something new, with a beat of its own.

While one of the most precious outcomes in the piece is that the math and the randomization create a seamless loop, Andy sure hopes that viewers can occasionally spot a clear geometric form.

“You'll see a dodecahedron or you'll see a pyramid because they are indeed being traced by these particles. And then the whole thing is rotating using a kind of a Brownian motion sort of algorithm which makes the particles bend on curved paths. That is what obscures the underlying strict sort of geometric basis. These lovely curves and occasional clusters help where the animation speed doesn't move fast enough. So in the many layers, it starts with something rigid and mathematical to which I added a couple of different layers of randomness, with different flavors of randomness.

You can have pure noise which is quite harsh and you can have modulated sine waves that would still be random but they'd always have that wave-like element. You can have Brownian motion which feels a bit like watching you know, particles suspended in water, moving with an almost life-like movement.

“I think the guy that discovered Brownian motion thought that he was seeing living creatures, because it looks so emotional, looks directed, and looks like you know little creatures are moving around trying to do stuff. But that is actually just the work of our brains, ascribing personality to randomness when it come to question.”

Hear @andybak share the many loves he has managed to combine, in the artwork 'Gossamer' (2020) - pic.twitter.com/En2OlAyO1b

Gossamer is a piece where the process itself is one of faith--let’s even call it a meditative exploration--without an exact guarantee of what the result might be. Andy shared how he got worried a few times while tweaking various parameters -- starting to get the anxiety that it was looking worse than before and that un-tweaking may not help revive the things that were right before.

“Essentially it is a series of happy accidents, really. I mean, there's a sense that you learn over the years things that work and things that go together and you get a sense for, it's like kicking in, you chuck a load of stuff in the pot, and it's not entirely predictable how it's gonna come out you, you get a sense for what might work. At least that's how I cook!”

We spoke about the opening night of ‘Body Clock’ attendees from which were crowding the room with Gossamer on display. We asked Andy what he felt about the reception the work has received.

“My internet was playing up that night. And so, for the first quarter of an hour, I was a ghost and nobody could hear or see me. But I could listen. And so I listened to everyone talking about the piece of what they thought of it. In a way,  it was a rather wonderful way to have that first public showing. I didn't have the self-consciousness and the embarrassment as people were saying nice and/or not so nice things. I could just lurk and listen. And it was great. People were really appreciative about it and I could feel my chest puffing with pride all the way. And then the headset suddenly fixed itself and I had to actually say hello to people.”

On the subject of the future of VR, Andy felt certain that a lot more content creation tools and tools for artists are en route. He hopes that the new tech will come with a spirit of synergy, to let creates rolling in unexpected outcomes.

“So better workflows, more crazy combinations of stuff, more collaborations. And the audience itself! We need to get more people in headsets and show them how incredible VR works can be. Show them the things that cannot exist in any other medium.”

Andy’s advice to artists considering migrating to VR is that they spend as much time as they can in social VR, exploring things, downloading the weirdest demos they can. He believes that some of the now-forgotten work, work released in the initial stages of the current generation of VR. There are some wonderful narratives and many strange little experiments that he believes someone ought to curate and catalog before they get lost in the mists of time.

The final image that Andy left us with was how he lives in a house full of pictures of pugs.

“Even though we don't have a dog anymore. And I've got a herb garden that currently has no herbs in it, because they died and I'm the world's best gardener.”

‍
Learn more about Andy Baker on his website. 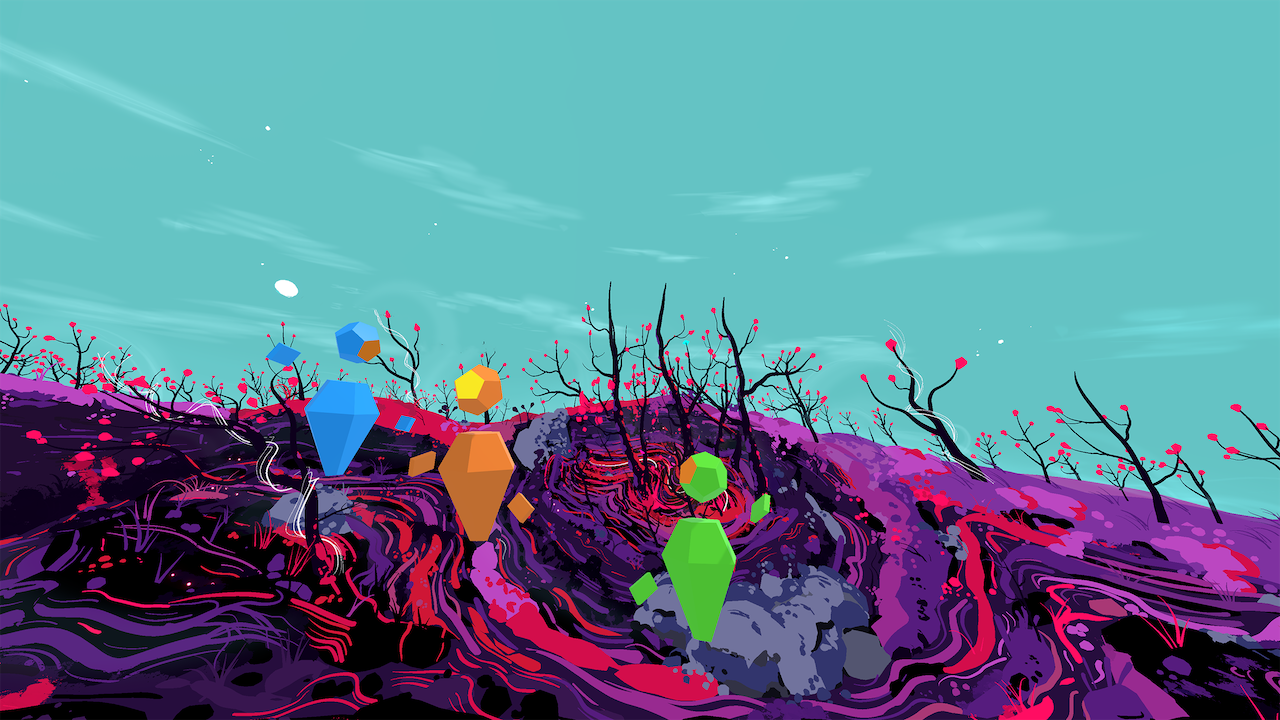