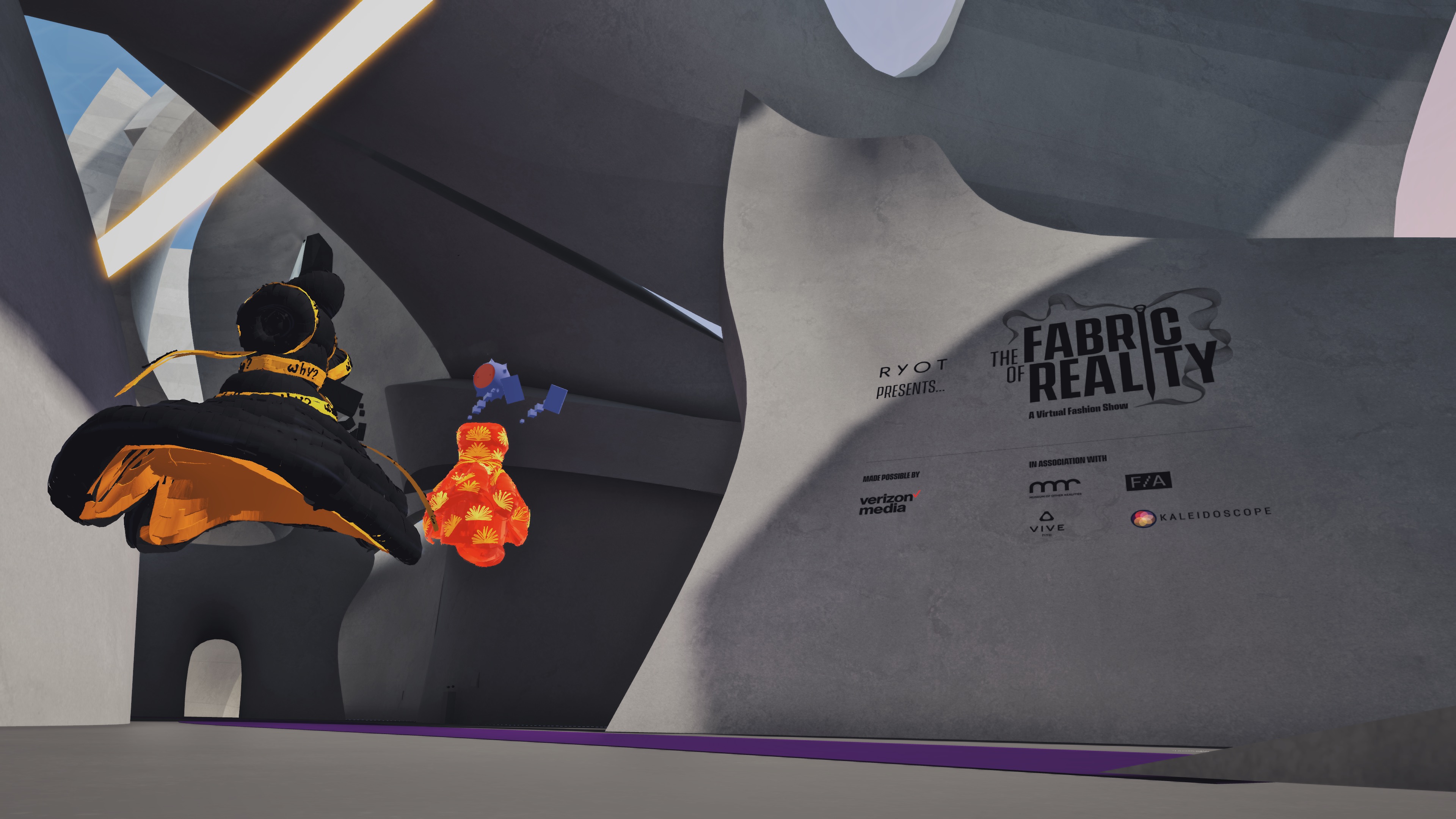 The Fabric of Reality was a first-of-its-kind virtual reality fashion event with immersive works of fashion design. We were lucky to host some pioneers from fashion-tech and observe a newfangled ruffling of immersive narrative devices, in pursuit of virtual apparel. A Forbes Business article by Katie Baron deserves a hat-tip right here, as it noted in fine detail the wider optics of this novel, immersive fashion event. Nearly 150 attendees came to attend alongside the 100k+ who tuned in via live-stream, to collectively nudge the known image of a catwalk, along a futuristic axis.

Sam Field, Head of Creative Technology EMEA at RYOT summarized the objective of the event as a “reimagining, not a replication” of the runway. Baron wrote about how the event dared “pushing fashion’s long-standing raison d’être as an agent for wider cultural communication and a fulcrum for trans-industry collaboration” with the three distinct virtual reality experiences shown at this event.

We got in touch with the fashion designers and their XR counterparts for a debrief, greedy to gain deeper insight about their collaborations of course. So here we are, role-calling these joint forces :

All three works were experiences or ‘story worlds’, as the collaborators chose to refer to them. Each, an attempt at reimagining concepts that hold value for the physical body - one capable of memory, tactility, performance, fatigue and consciousness. Something Katie Baron put in writing -  highlighting a difference in stance and a clear shift in vantage point, here - was the switch for the viewer to go from “voyeur to player”.

“Beyond the immersive visual artistry, the most significant departure from a traditional show experience was the honing of interactive communal virtualization. It will upend the watcher vs. watched dynamic that’s always been the bedrock of the traditional catwalk spectacle, creating instead a dialogue-based landscape primed for the kind of personal engagement” she notes.

Fetching all of the conceptual details, from the creators of these worlds themselves, here’s what we could sum up.

1. 'Embrace Your Meh with Duvet Days'

The multiple elements and story world for this piece attempt to explore the inner struggle of someone with mental health concerns.  Anxious Alien by Hana was chosen by the artists to accompany the work.

Charli Cohen shared how she and her collaborators wanted to understand the farther end of high functioning depression. “I was really excited to understand what is possible within this space - it is very much outside the realm of anything I’ve done before.” The Gudetama ‘lazy egg’ character of Japanese brand Sanrio draws in visitors to an inner-chamber of sorts, where a DJ hosts an audience. This concert setup even includes a back-stage with racks of clothes from Cohen’s collection. A more extroverted version, perhaps - of the same character- stands guarding this inner world with an ‘Upcycled Why Coat’ on. Visitors can click in and wear this coat for an altered view of the garment.

Ana Duncan added how the key concept here was “showing a side of energy, and a side of lethargy”. The VR garment design was created to feel wearable but in a fantasy setting where an anime goddess is surrounded with the lounging gudetama.

“For me fashion is a medium for telling important stories. And in VR, the translations of these stories can be pretty much limitless,” says Cohen. The gudetama has been featured in Cohen’s prior work as well and we were able to see some character sketches shared between the collaborators that observe the lazy side (or ‘gude gude’) of the tama (from tamago - egg in Japanese) in an
egg-sistential crisis, if you will.

We also spoke to John Orion Young, who measured these mood swings in careful strides, as “the closer you get to gudetama, the deeper you go into his feelings”. The frenzied concept of having “a party in a frying pan and going inside gudetama’s head” was what made the collaboration a joy for Young. The audience in the story world hypes up the gudetama with all their adulations and celebrity worship, while the gudetama is chained in an eggshell. Several motifs here bring up the artistic struggle that the persona must endure for the sake of the show and the patrons.

The jelly-like portal with all its visceral, fleshy elements took turns and dimensions, as if to hold space for a powerful striding goddess. The narrative here was created with moving parts and swirling liquids that were as much an ode to the elements as to contemporary tricks of light and depth. The sound design was a combination of a voiceover by Inglês’ with production by Tobacco Rat. Another track can be heard if one floats closer to the outer membrane of this bubble - designed by Em Halberstadt from A Shell in a Pit.

“Symbiotic_Wear derives from the idea of symbiosis - the interaction between two organisms. The virtual fashion in this sense becomes an extension of the user’s virtual identity to allow them to better interface with their new virtual environment, an environment that does not comply with the laws of physics in our physical world reality. In our environment there is weightlessness and an ability to fly and interact with the virtual world. Our model on her virtual catwalk demonstrates how her holographic floral extensions move weightlessly with her and stretch out to interact with the greater environment.”

“Damara happens to have a great vision for the future of fashion, and also that of the relationship between the physical and virtual body. Damara entered the project with an ethos and a mood board that communicated very clearly the direction that she’d want to take and this direction was very much in sync with my thoughts about virtual identities. We both understood that these two areas of virtual identities and virtual fashion are interrelated - as forms of personal expression.”

Sutu reported how he sourced the Unity project files with Damara and taught her how to use the collaborative features so that they could iterate on their initial designs. The time zone difference worked in their favour, as one would work a shift and push updates and then the other would receive them, see the progress, bounce off ideas and then add their own. "I would then respond to Damara's new additions and continue. This feedback loop was healthy and full of surprises that kept us both motivated to push our collective artwork to another level” reported the fairly satisfied artist.

In an Instagram post by Tobacco Rat, Inglês describes the installation using the notion that “we are cavemen of the virtual age - the very explorers of a virtual era that is yet to fully unfold”. As such the dynamic experience hopes to question “the potentials of the interactions between fashion and post-human bodies, cyborg inter-beings that explore the elasticity and fluidity of persona”. The collaborating artists were inspired by the deep ocean creatures that they imagine floating in space like a surreal galaxy of connected beings -- a metaphor for portals entering parallel realities. The piece is also interested in approaching the notions of digital privacy, activism and fashion sustainability.

“Rachimova and Ilic’s world was a sanctuary in homage to nature, via a palette cleansing virtual tunnel of lights before a calming space” wrote Baron. In a note from the designer, we found a description of an ‘Eternity Coat’ - one capturing time and space in its weave - with multiple layers, different perspectives and some blank and transparent parts or mirrors that reflect back the viewer’s image and include them in the memory being stitched.

The collaboration conceived a story world situated in the 'outside', such that a garment is not being entered, but an inference of existence is being extended.  Exploring the meaning of space and time, of moving around in nature through a stitched and handcrafted garment that etches the memory first, before being created in VR. The visual references came from some works of embroidery from Rachimova’s family archive - some pieces embroidered by her grandmother along with some crochet and knitting work from one of Rachimova’s first pieces. And overlaying recorded voice-overs in her mother’s and her own voice (spoken in Tatar and Russian) to make a connection to the past, in all sincerity. The installed work allows some elements of interaction too, like one could attach floating flowers to their avatar. This is a manner by which the viewer gets to “become part of our memories. You will also see crystals in our story world - they represent a way of looking into the future as well as seeing your own reflection from the past” said Rachimova.

Sabinna found the whole experience to be beyond incredible. Her collaboration with Ilic opened a whole new world to us and it was amazing to see how a process that began in sketches on paper evolved into a VR world.

“Vlad is a real visionary and I had a lot of fun designing for a virtual space. Vlad and I have similar backgrounds and both wanted to explore our roots and traditional handcraft from the places we are originally from. Also, we both felt strong about the sound aspects of our story world. It definitely helped to be on the same page and combine both visions during this exciting collaboration”, she expressed.

The ability to feel ‘present’ near these garments in all their appeal is a “game-changer”, said Moin Roberts-Islam (Technology Development Manager at FIA). “It’s a very visceral and powerful method of communicating with an audience.”

In her Forbes article, Baron recognized a core subtlety of the show that can be captured where the ‘self’ meets the ‘synthetic’. She perceived the show as a mastery of “the ‘human tech interlace’ – a cohesive blend of the self and the synthetic to elicit a more compelling, intimate and personal brand experience”. Needless to say, she indulged in all of MoRs social affordances - the avatar generated shadows, the sound design emulating small huddles and the parting of ways; floating to seek “connection amid the decreed anonymity”. Such submergence made the live event feel like a near-real brush with bodies, and perhaps with fabric in a new media fabrication.

So, here's to a virtual all-season fashion collection. The experiences shall remain in the MOR for the next twelve months for the perusal of visitors - with several embodied tangibilities as new realities for us to don.