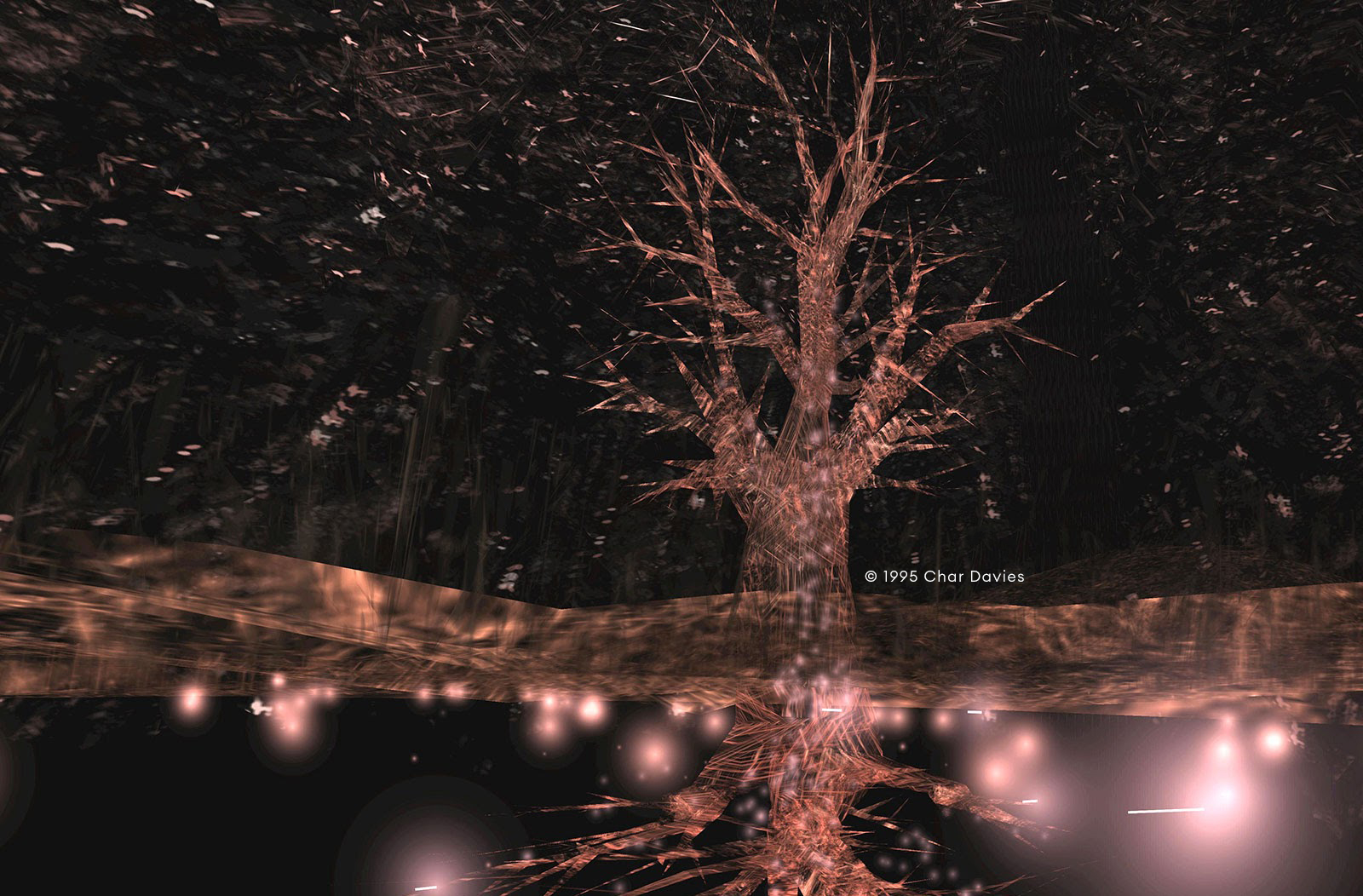 Our next talk event on March 25th, 2021 at 9 am PT stirs up the pressing question concerning the temporality of VR art. We're honoured to host and extend the perspective of VR long-timers Glen Fraser, John Harrison and Jacki Morie as our guest speakers for 'Immersed in Restoration'.

While it might surprise contemporary VR artists in 2021 to hear about the first three decades of VR art history, the question to also raise is why don't people know about these early works? Can they still be experienced now, and where? What would it take to resurrect them? In this MOR Salon event moderated by Jacki Morie, we'll look at a famous 1995 VR artwork by Char Davies, and hear from its guardians what efforts have been made to keep it alive and running for future audiences to enjoy.

In 1994-1995, Davies created the immersive virtual environment Osmose, now considered to be a landmark in the history of virtual reality and new media art. Intent on subverting conventional approaches to VR, Davies and her team developed the use of semi-transparency in real-time, and invented a user interface based on breathing and balance that enabled immersants to seemingly "float" among translucent landscapes. Osmose and its companion work Ephémère (1998) became world-renowned for their aesthetic sensibility, technical innovation and emotional effect on participants.

These works have been widely exhibited, including at San Francisco's Museum of Modern Art; Barbican Art Centre, London; Australian Center for the Moving Image, Melbourne; Museum of Monterrey, Mexico; Montreal Musée d'Art Contemporain; the National Gallery of Canada; and Laboral, Spain. They have received extensive media coverage, ranging from Art in America to Wired and New Scientist, and continue to be the subject of academic studies. The first monograph on her work, Char Davies' Immersive Virtual Art and the Essence of Spatiality (by Laurie McRobert) was published by University of Toronto Press in 2007. Both Osmose and Ephémère were recently re-mastered to run on contemporary technology.

Glen Fraser builds software for the interactive and immersive arts. Experienced in graphics, sound and device programming, he developed VR projects at the Banff Centre for the Arts and Telepresence Research in the early 1990s, before shifting to create commercial tools for 3D artists at Softimage, in Montreal. After moving to Spain, he contributed to audiovisual performing arts and open source projects, and has become active in the local live coding community. Immersence contracted him to remaster Osmose and Ephémère in 2013, and he continues to collaborate with Char Davies on new projects.

John Harrison is a Software Engineer whose focus is on working with artists to develop VR artworks. He developed some of the earliest VR art installations, including over a dozen works produced at the Banff Centre for the Arts from 1991-94. From there, he focused on creating VR installations for Char Davies in Montreal, Canada, developing Osmose (1995) and Éphémère (1998), which subsequently toured worldwide. After stints as a developer for Softimage|XSI and as a computer vision PhD student at McGill University, he has returned to the art world, and is now working at Immersence to develop innovative tools for the creation of new artworks.

Dr. Jacquelyn Ford Morie is known for her use of Virtual Reality (VR) to deliver meaningful experiences that enrich people’s lives. She developed multi-sensory techniques for VR that predictably elicit emotional responses from participants, and through her company All These Worlds, LLC, makes virtual worlds for social connectivity, Mindfulness, storytelling and stress relief for veterans and others. She recently built a virtual world ecosystem for NASA called ANSIBLE, designed to provide psychological benefits for future astronauts who will undertake extremely long isolated missions to Mars. Dr. Morie is currently working on a new version of her patented scent device to bring more emotional power to VR.

A little more about this restoration project offered up from Glen Fraser’s blog, in his own words -

“Immersence is Char’s research company, which was founded in 1998 to continue the work she’d started at Softimage. Shortly after its founding, I believe Immersence purchased the last four dVisor headsets produced, just before Division went out of the HMD business entirely. This turned out to be a smart move; a couple of those headsets continue to function – sort of – though neither of them does so gladly. And until the Vive and Rift headsets came along this year, the pickings were slim for a good replacement headset.”

Hear the full story by joining us on Thursday morning. See you in the MOR on Thursday at 9 am PT!