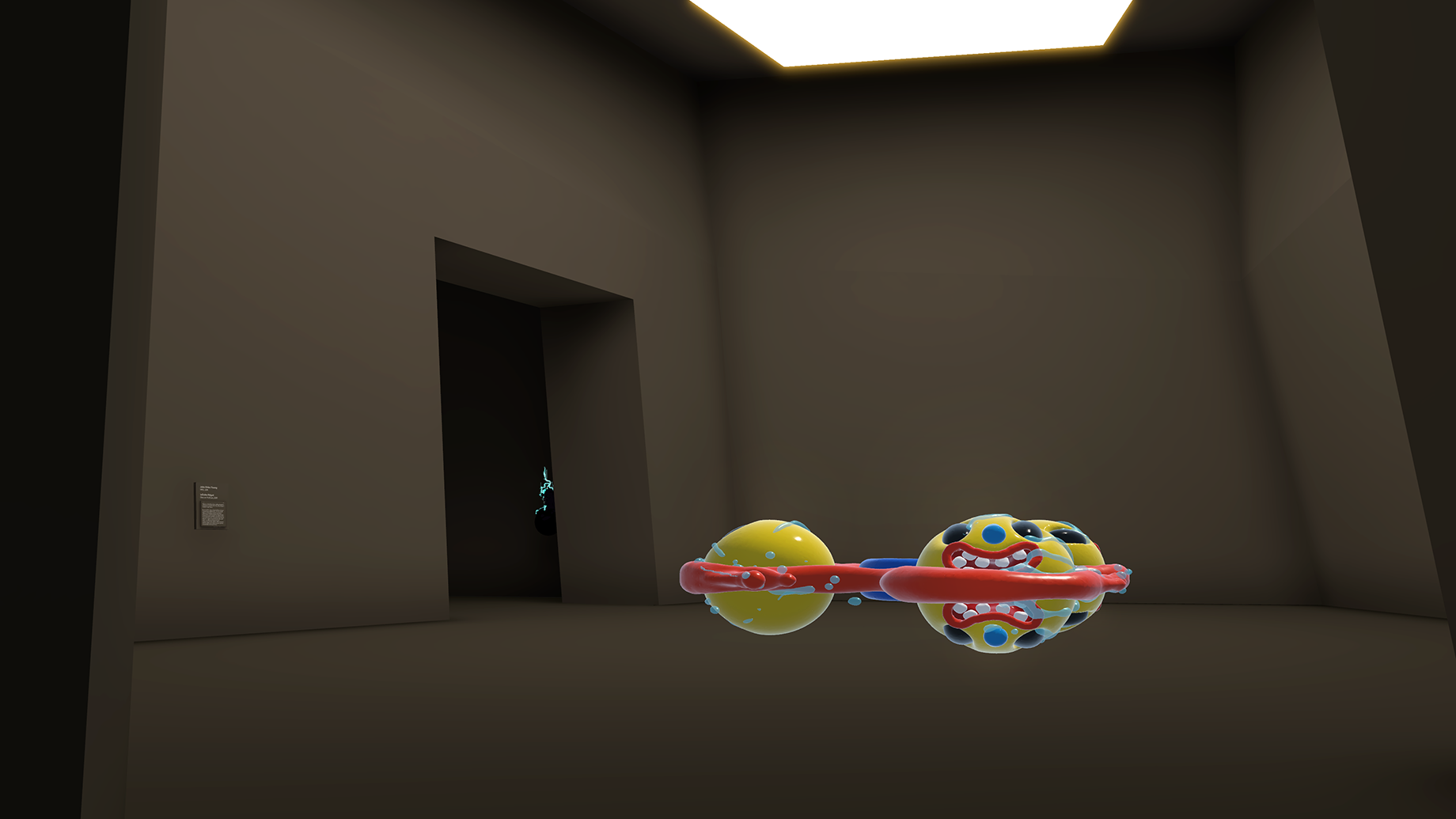 John Orion Young (JOY) uses virtual reality (VR) as a tool for creating unique art pieces that are often sold and exchanged on the Ethereum blockchain. Young's site has been consistently popular with his collectibles generating a lot of activity on the blockchain. In this interview, he touches upon some fascinating aspects of the physicality of creating in the VR medium, digital art ownership and its indexicality.

I’m John Orion Young, also known as JOY from JOYWORLD. I make art and virtual reality, and I’m building a magical world for all the JOY creatures to live in.

What is a JOY creature?

A JOY is a virtual creature conspiring you to be joyful and creative. You can own a JOY and JOYS train you to be happy and creative. They live on Earth too, but only people who own JOY can see JOYWORLD.

What does an average day in your life look like?

I usually wake up at 5.00 AM in the morning, super pumped to go make things. I drink lots of water, have coffee and maybe eat a bowl of cereal. I usually go into VR for an hour or two, and sculpt. I try to make stuff before I get into the day and lose my dreams. I answer emails, work on different projects, call collaborators. I’m working on getting an investment for JOYWORLD, so there is lots of calling VC people and probably give them the weirdest conversation that they may have to deal with for the week (laughs).

How did you get into VR? What did you first make in VR?

Way back, I used to make paintings. But I wanted to make a lot of stuff, but not generate a lot of waste or need too many materials and stuff. I remember a video I saw, an early Oculus prototype shared on YouTube, where there was a giant, red spider. It was showing in Mixed Reality and filling the whole room and they were all just sitting in the room casually. And I was like, “Wow, this is the most amazing thing! You can make stuff and have infinite space to create”. I was in SF at the time, and I was trying to find something with a headset and I saw that Best Buy had a headset. So I just went there and tried it, and I think I got chased by a T-Rex. And I was like this is so cool. And from there I got into Tilt Brush, did that for a while. Then the touch controllers came out and that’s when I found Medium and got obsessed with it.

Oculus Medium is your primary VR tool - what drew you to that?

I think that sculpting a giant balloon in the air. And just having this volume of weightless clay. It kind of relates so much to real materials. I’m just kind of drawn to it. You know, the way it feels, it’s stretchy and gooey. It’s really fun and it is hard to not go play with it.

Sculpting even as a classical medium is tangible and spatial in nature. How does that training and experience translate for you in your VR workflow?

I grew up training in my Dad’s art studio. He is an oil painter and a bronze sculptor. He is into hyper realism and animals. I kind of grew up with a more traditional training. While I was always drawn to digital mediums, it never really latched on for me.

I was very much into paintings and playing with physical stuff, because I like the feeling of moving my body to make something. Once VR came out and I went in and started making stuff in there, it kind of replaced traditional for me. It feels just as real yet it is more surreal. And that makes it more fun!

Why this visual style? How did you come to find it?

I don’t know, it just keeps coming out of me! I remember that the first thing I sculpted in Medium was a smiley. And I just kept playing with it. You have a ‘move tool’ in Medium that you can use to stretch things, so I kept stretching it for fun. I don’t really draw anything or plan out stuff ahead of time - I just go in and I make the thing. It is usually as if it is trying to escape me. That is kind of my process I guess! That a creature wants out and I must manifest its existence somehow (laughs)

Could you walk us through your creative process? What are your considerations?

Usually I just start in Medium? I’ll just grab a brush and start scribbling, I’ll grab some clay and then stretch it and paint it. I just work with my intuition. There’s a lot of consideration about wanting it to be fun - as I want to have fun - and I want it to be wild. I kind of want it to be something that people find fun and new, to experience. There’s not a lot of rules (laughs) I just let myself do what I want!

Since JOYS have some human qualities - so sometimes I give them a wristwatch or a special belt, a specific T-shirt they want. So I’ll just make that for them.

Let’s talk about your choice of colour and form - about how it speaks to a certain internet language of emotions. Could we speculate how your visual vocabulary sometimes references some natural and capitalistic forms?

JOYWORLD definitely wants to be a part of the contemporary conversation. I think it’s good to use certain tropes that exist in the world. The Kitty Hello JOY for example - so many different artists have made their version of Hello Kitty - so it’s almost like JOYWORLD’s take or version. Same with Mickey Mouse, and glimpses of other characters that come into JOYWORLD.

It has a little bit to do not with where we are in time but also a little bit with ‘the familiar’. Like we can consider the inside of the MoR as an illustration of the same. There isn’t a need for walls and a ceiling but it’s a familiarity to give us scale, give you a scale. It makes it all relevant in our mind and relevant to cultural reality.

That allows an interesting segway into the subject of indexicality. Do you think indexicality works differently for Blockchain VR art?

The Blockchain part is interesting to me as I love the way digital art can be shared and experienced and relies on indexes online to allow everybody to have it and see it. Unlike a physical painting, when you experience something digital you experience it just the same way that everybody else does. You can experience it on your phone, unlike a painting that you need to go and see in reality.

The thing that Blockchain does is that it ties a digital thing to reality. It makes it a thing that is like a token. And I like that idea that somebody can own something and it can be unique and special to them - and they can be the owner. But at the same time everyone else can see it and experience it while it is essentially being owned as a piece, say, the MoR.

What is it to truly own your artwork?

I do not believe that on this Earth anything at all can truly be owned. You can’t permanently own anything as eventually you die. This eventuality puts everything in transition. So even if you own an artwork, you never really own it. So I think my work is kind of a nod to that.

The way that the JOY art market works is that I’ll sell a JOY, and if somebody is willing to pay more for it, they can always buy it. So nobody actually can own anything. They can only own it temporarily. It’s different from other collectibles on the Blockchain because most collectibles can be owned and kept in your wallet forever. The reason I kind of moved in the opposite direction is because my personal belief is that you cannot own anything in reality. You can own land but the government can take that from you or you can die!

I am exploring both, the virtual side - more so what I’m heavily into right now - and then I am looking to merge it into reality. So definitely some of the stuff from JOYWORLD will cross over into reality. But I can’t quite discuss ‘how’ (laughs). For now that’s all a secret still!

Have you implemented VR into your professional workflow?

Definitely. I’ve done a bit of commercial work also and pretty much everything I do is done in Medium.

Are you currently working on projects you can talk about?

I’m working on JOYWORLD and on an Augmented Reality project with a friend, but I’m not sure if they’re ready to talk about that

Tips for artists starting out in VR?

Do it! Do it! It’s incredible. It’s just the way. Everything will be in VR in the future. It’s inevitable. These tools are getting so good and I have seen how for other artists too workflows are speeding up with these tools. You might as well jump in now if you’re an artist! Better jump in now instead of waiting around for it to be the norm.

Where can we learn more about you?

This interview is part of the MOR Artist Spotlight series, which features creators using VR as an artistic tool or medium of expression. You can also view a spatial version  of this interview in the Museum of Other Realities.