September 3, 2019
Spotlight: Micah 404 on Collaboration and VR Illustration
by 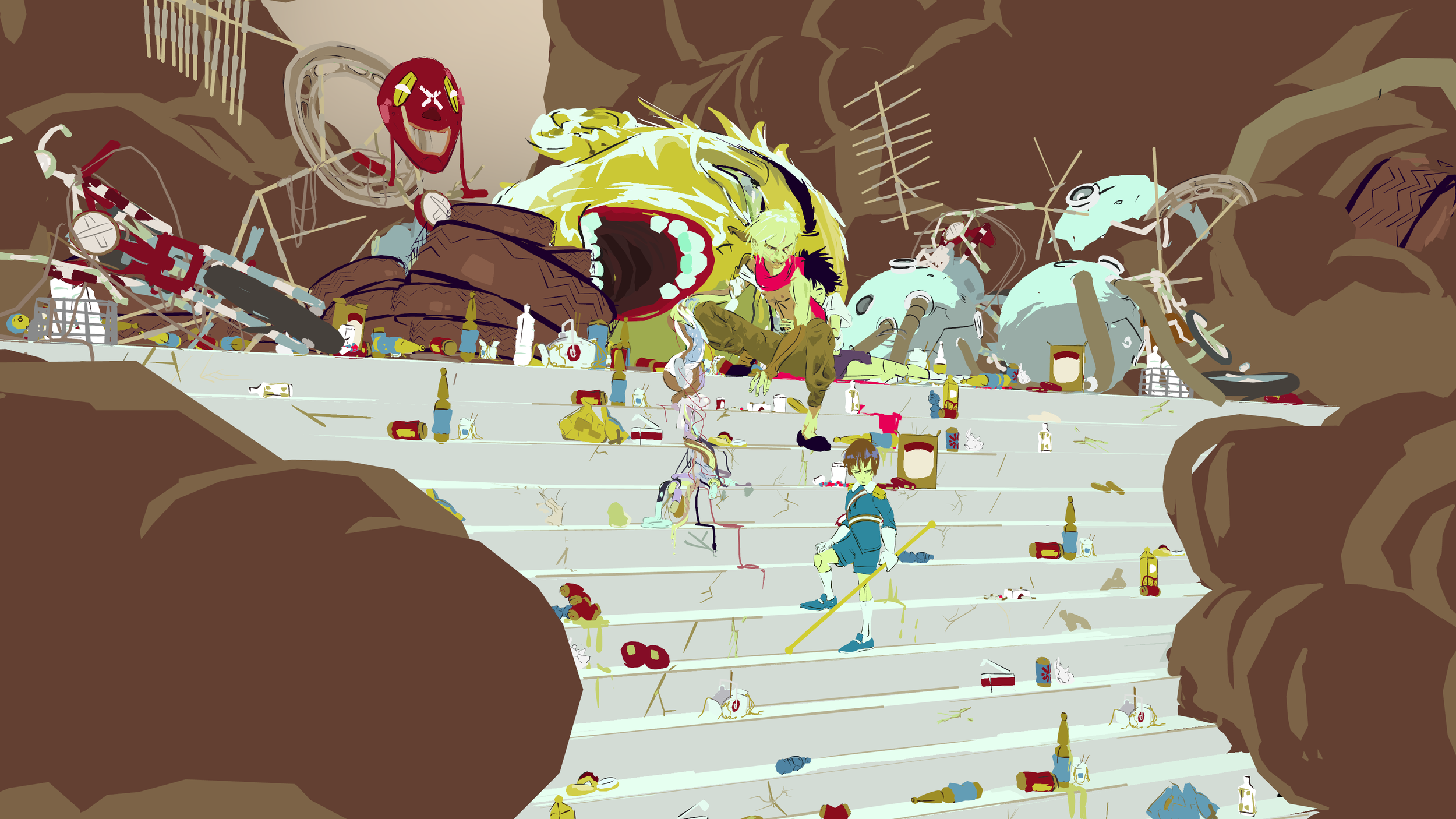 Micah Milner a.k.a Micah404 is a New York-based VR artist and member of the collective ART404, he gained notoriety in 2015 as a 2D illustrator with his Instagram project @micahnotfound. He has since jumped headfirst into VR illustration, becoming one of the most active VR painters in the community. Partnering with cultural institutions including the ICA in Miami, the Whitney in New York and brands including Adobe, Pantone and Google his collective, ART404, continues to blur the lines between commercial and fine art.  In this interview, Micah404 talks about VR illustration, influences on his art, and the importance of healthy collaborative relationships.

I was a 2D illustrator and graphic designer in my former life.

Do you remember your first VR experience?

The first thing I tried was Tilt Brush and it quickly began consuming the majority of my waking hours. Suffice it to say, I enjoyed it. A lot.

Would you say your prior work experience prepared you for the medium in any way?

Previous to VR, I was working as a designer and illustrator. While I'll admit that my knowledge of 2D design doesn't come into play nearly as much as I would like, my skillset in VR is built directly on top of my skills as a 2D illustrator. My work in figure drawing and gesture-based illustration has been integral to my style and precision in VR painting programs.

Mostly mark-making based VR applications, Tilt Brush, Quill, and AnimVR. I fell in love with Tilt for the same reasons as everyone else, the learning curve was almost non-existent and the mark-making experience feels like actual magic when you first try it.

Are there limitations to using the tools?

When working with VR tools you'll pretty quickly find hard restrictions, especially when dealing with animations. It's very tough to work cleanly and efficiently so file size becomes an issue you'll run into pretty frequently and then, of course, textures. Right now the solutions for texturing the models you create in VR are not nearly as bountiful as the drawing/sculpting solutions.

I really don't have one, I kind of just go. There's a lot of experimentation, sometimes it feels like its two steps forward and one step back and you definitely won't find a lot of instructors recommending it, but when I've spent a lot of time planning what a piece is going to look like before executing I rarely stick to my own plan. I definitely see the value in it planning ahead, just not something that's worked for me.

So where do you get the ideas for your work?

Steal them mostly. I'm much better at shaping ideas than I am at coming up with them, so I love to collaborate. I have been fortunate enough to surround myself with really talented people with a knack for coming with incredible ideas throughout my career. What I really enjoy is parsing them, when you have a great idea on your hands the next step is to get to the core of what’s driving it and amplify.

Talking about surrounding yourself with talented people, who are your biggest influences?

Tomer Hanuka. All my color palette choices are based around concepts I learned from him. He's also the direct inspiration behind my piece in the MOR gallery which is a master copy of an alternate cover for the legendary manga, Akira. In terms of VR work, I credit Liz Edwards for showing me what’s possible in the medium, by the time I got my hands on Tilt Brush they were already featuring a bunch of great work in the game and her work was far and away my favorite. I was blown away by her style and mark making ability, gave me something to aim for.

What lessons have you learned along the way?

When it comes to collaboration I find that communication and collaborator relationships are much more crucial to the success of a project than the craftsmanship of the individual jobs, I spend a lot of time and energy making sure everyone is on the same page and feels good about the direction we're headed. Another gem is that there is almost no place for negative comments in collabs, nobody wants to work with the XR Gordon Ramsay. Constructive criticism is crucial to sharpening your product/team but you have to be surgical in your approach and solution-driven otherwise the atmosphere can become toxic very quickly.

Illustrated by Micah404 in Tilt Brush

Where do you see VR heading in the future?

I've always thought we would see mainstream adoption in the conceptual stages of workflows. I do think that as we see more mainstream adoption of the hardware we'll have a much larger pool of creators using VR tools than desktop-based programs for the same reason we have more illustrators than 3D modelers, ease of use and enjoyability.

We need more crossover content that doesn't suck. Most of the XR content that is anchored in IP coming from traditional media has been pretty bad. When it’s done right (i.e. Pokemon Go) it can have a massive viewership from people new to the field. New mediums, strange hardware that goes on your face, beta UIs, 45 min waits at film festivals, it's all just such a huge ask of our audience to even experience our material, existing IP that people are already connected to is the only proven way to convince the masses.

Great! Where can we find out more about you and your work?

Twitter, Instagram, my collective ART404 has had a ton of viral work over the years. art404.com if you want to check us out.

Just jump in, you'll love every minute of it and if you're dedicated you'll get noticed quickly. Everyone is new to this and there are very few people working in a headset full time, so the opportunities are there.

This interview is part of the MOR Artist Spotlight series, which features creators using VR as an artistic tool or medium of expression. Some of the artists’ work can be viewed and experienced in the Museum of Other Realities.