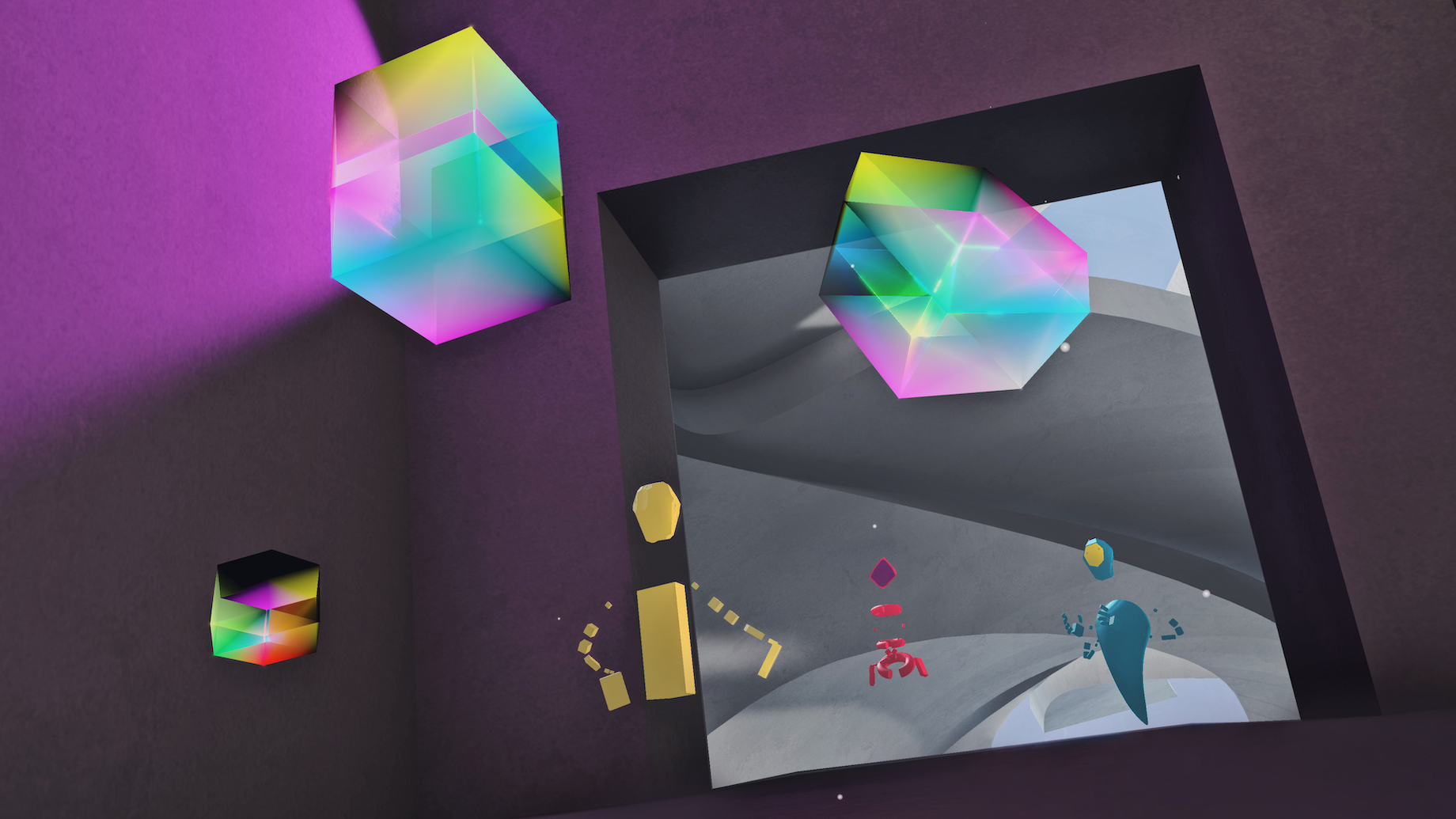 We’re ready to share a collection of six works by artists questioning and challenging the body for its physics, as it climbs meaningfully outside of limbs and limitations to clock a newly calculated body dialogue. The MOR is excited to be back with this show, and most eager to see what conversations emerge from the intersection of these artists.

The show opens on November 19th at 6.00 PM PST. Mark your calendars as the event is always a neat opportunity to meet the artists alongside the artwork.

Gossamer is a room scale experience that might be the most ephemeral aspect of this show, with wispy tendrils forming and multiplying by truly leaning into musical tendencies of mathematical patterns. The maths behind the piece can partially be traced back to the work of mathematicians like John Conway and George Hart. Andy Baker also credits Keijiro Takahashi’s faux-bokeh implementation in Unity, which has been used in Gossamer.

Andy told us how calculated care went into tuning the process to allow a wide variety of forms to appear. “Generation based on randomness can often feel a bit arbitrary and meaningless. The trick is to balance the elements so there’s an illusion of something intentional going on”, he shared. The look and feel come from a love for geometry but also wanting to soften it, by getting rid of the ‘hard edges’ - to give it more fluid, life with breath and texture.

Created in Unity. 3D Slicer was used to conceive the work.

Marilene Oliver has a massively impressive body of work that takes an interest in corporealities, from a perspective conceived through the materiality of digitised bodies. Deep Connection is her first work which makes use of virtual reality as a medium. Marilene’s experiments using the Body VR app to create 3D medical scan datasets triggered the conception of this artwork. The datasets appeared as semi-transparent blocks of data - which as an experience in the museum with a layer of sound design truly alters the reading of the flesh and tissue image, making the viewer engage differently with ideas around digital gaze. Deep Connection is the result of several disciplines brought together. The work was co-authored by Assistant Professor Marilene Oliver, Assistant Professor Kumar Punithakumar, Professor Pierre Boulanger, Professor Richard Thompson, Dr. Chris Hanstock, Peter Seres, Preet Giri, and Madhavi Nimalaratne. The interactive soundscape was made by Gary James Joynes using recordings of an MRI scanner, modular synthesis and voice.

The work is interested in this more connected view of the body, where the exploration can be one of empathy. The artist’s own body has been replicated and tuned for the dynamics of virtual space.
‍

Almost a centerpiece in the show, with its size and mass in the gallery, here's a piece by Mez Breeze. Here’s Gerald McWonky helping ground any aloofness you brought with you, with his insistent weight but opposing body language. This robo-humanoid is here to plonk, with no airs or cares. But in a near-endearing way (you most probably will turn your head at all angles) this mighty assemblage of ‘scrap’ will uncannily remind you of old fondness for Frankenstein.

Originally Gerald was created as part of the “Sustainable Future Cities Initiative" developed by Microsoft, Samsung, MasterpieceVR and Sketchfab. “The process was all about getting a decent sense of weight to him, with an asymmetrical skewed-ness [without him looking too lopsided] while hinting that he’d been placed on a scrapheap, possibly after having key components scavenged from him [explains the holes]!” Mez tells us.

Dami & Falian: How Was Your Day?

We included a 360 film in this show, and you’re going to like the way its glue holds. How Was Your Day by Edward Madojemu invites you to follow two characters who go on adventures involving alien worlds. With one character representing the ‘new’, and the other embodying the ‘accustomed’ - the film explores the folds of new culture, of finding a new home in an unknown land. This short science-fiction story is in fact how Edward chose to process the emotions as he came from Nigeria to Canada.

As a viewer, one will find themselves in the beyond-place, where the three dimensional existence is made possible only through virtual reality. This spectacular piece, with its play on light and colour within a forming and reforming cube, was inspired by a conversation with bio-artist and researcher Joe Davis, and a subsequent challenge posed to create a tesseract in virtual space. This piece is based on the research work of Four-Space Visualization of 4D Objects by Steven Richard Hollasch and Luke Holland.

“By visualizing dimensions beyond our current space, we can perhaps get a glimpse into true base reality or find a connection to the Quantum Soul that connects us all” hopes Kris.

The Hug of Hong Hengcharoensuk

Sufee Yama shared how this piece is an attempt at preserving past memories with her late grandmother, to let them sediment and be held in virtual space and time. The piece was conceived during a cleaning spree spurred by the pandemic, taking the artist back to a shared past with her grandmother. This immersive portrait is a recreation of an oil painting, created in VR using Oculus Quill.

“The expressions of every brush stroke and choice of colors in the original oil painting that were filled with love and admiration are revived again in 360 space by the Machine Learning - Style Transfer technique using an amazing software called RunwayML. In this way, I can always re-immerse myself and others into the love of my grandmother again anytime.”

We interviewed Nick Ladd and added two spatial interviews from his visit, which can be viewed near his works ‘Prey’ and ‘Prehistoric’. For the longer piece that covers more ground about his work at Studio Syro and his mastery of Quill as an animation tool, you can read a dedicated blog piece here.

Hoping to see you at the show for a fuller, more in-sync with these bodies experience!