April 20, 2021
Volume One: Realities and Dimensions
by 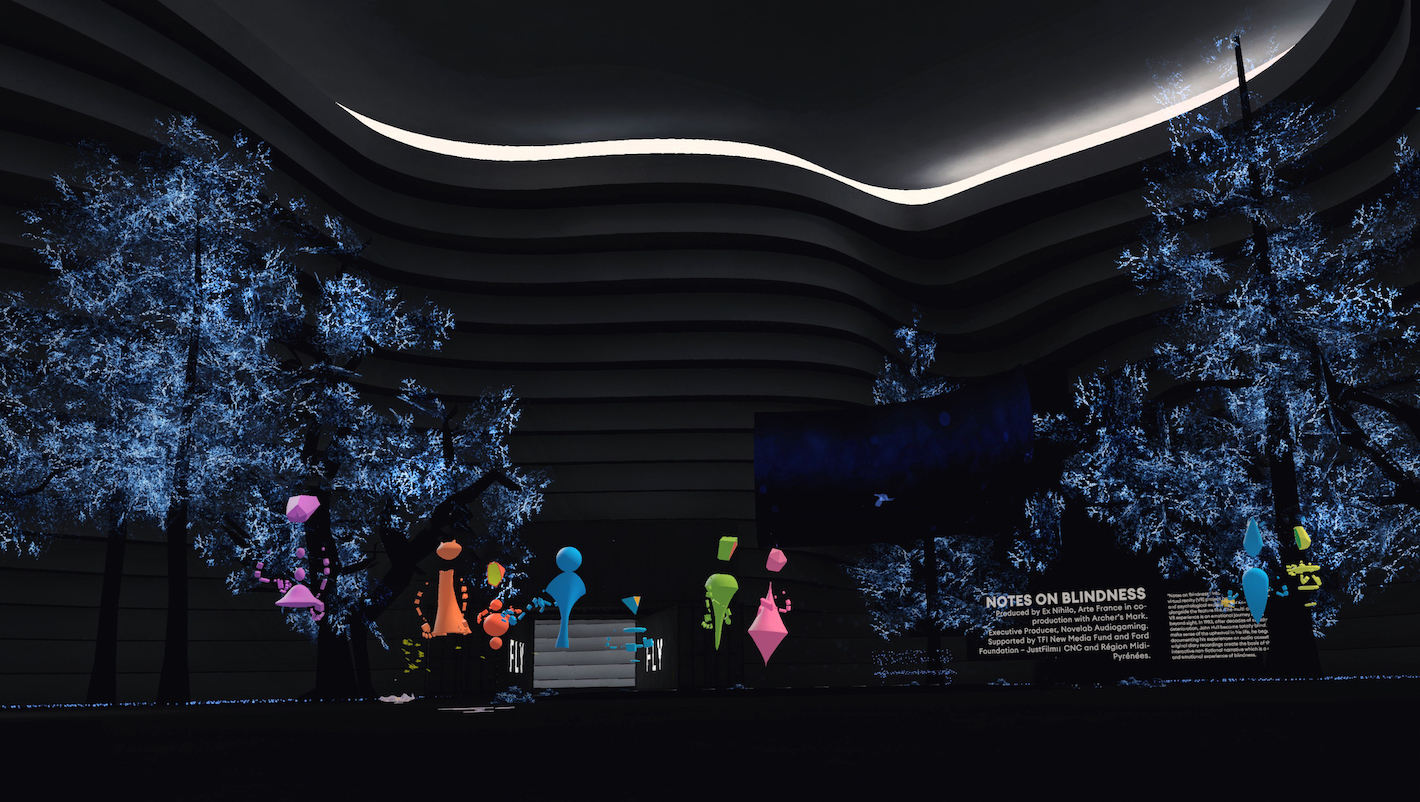 The MOR had the pleasure of meeting with the creators behind the four stunning experiences that were exhibited as Volume One of the Immerse Arcade: The Showcase.

In case you missed it, we’ve put together everything we learnt from the artistic directors and immersive studios behind The Invisible, Notes on Blindness, Fly and Common Ground.

The Invisible was originally created to be a spatial audio piece - shown previously in the UK, LA, and Melbourne. Darkfield - the studio behind The Invisible started creating spatial audio experiences in shipping containers. The shows were experienced in complete darkness, with headphones on. The Invisible is their first-ever VR piece, and it was exciting for them to explore this new medium.

When David Rosenberg and Glen Lee first started to collaborate as artistic directors, they created work for audiences in the dark, which would get placed into theaters that had to be blacked out. It was only later that they started to install the work in shipping containers. The idea was to put the audience in a sustainable environment where they feel a bit vulnerable, while finding distance from distractions that are hard to cut out in theatres. A key component of the work being in darkness is that it allows for the creation of doubt about what is real and what is imagined. As a viewer, the never-quite-knowing whether what they hear is happening in their headphones or the space around them is a little spin being leaned into.

“Immersion is very much about the imagination, and by removing the sense of sight for the entire audience asks them to create an image of the event in their mind, in the new environment that they're in. We started making this work not intending for the show to be frightening - that wasn't what we were initially exploring. But we found from our first shows that it was one of the main things in audience feedback. The immersive sound really creates the presence of characters next to you.” - David Rosenberg.

Notes on Blindness qualifies as one of the VR classics.

The idea for Notes on Blindness began as a podcast, with an interactive element. When the Novelab team began prototyping, they realized that they were lacking something because talking about blindness by using only sound for a sighted audience lacked this relationship between the senses. Using omnidirectional sound, the team wanted to translate into visuals an experience of space for sighted people - to truly experience what John Hill describes.

The experience is created using the distance between the elements in the architecture and movement from a rooted standpoint. The idea was to create a revelation of the environment using the contact between things in the surroundings of the listener. The scene has been rendered very partially by using a kind of bluish texture system, and an intention to “try to inverse”, as the usual perspective immersive viewers know is that the visuals drive the sound. Amaury shared how the team at Novelab had an insight about visual memories - that they just disappear even for sighted people. Visuals become meaningless real fast, and so why should the brain even store those things?

“We do not claim that we represent how a blind person perceives the world but we tried to create an idea for sighted people how it can feel to perceive things differently. So we came up with this whole representation. - Amaury La Burthe

By Director and Immersive Creator, Charlotte Mikkelborg, Fly was originally built and set to greet potential fliers in London, at Saatchi gallery - inside a “massive egg”. The work has a location-based experience designed for gallery visitors, which has been somewhat reimagined for the MOR and the Immersive Arcade.

“Fly turns you into a time traveling pilot from the time of a young Leonardo Da Vinci, who dreamed recurrently of transforming into a bird and taking flight. Da Vinci made huge inroads figuring out flight, but never actually quite got there. In the second chapter of the experience, you get to pilot one of his flying contraptions. And then by the third chapter, you become Wilbur Wright on the wing of the Wright flyer and get to pilot that first flight for humankind.” -Charlotte Mikkelborg

The experience takes you through 100 years of flight - you get to pilot the first international passenger plane, and then the Concorde and eventually, in the final part - take a plunge into the unknown, a potential future of flight 100 years from now. What was really important in the design of this experience was not only an exciting journey but one where you learn about humans made flight possible.

In her research of how the VR medium could be fully utilized, Mikkelborg saw a 1000 pictures on the Internet of Sandra Bullock and the rig designed for her during the filming of Gravity. And that had been designed by Neil Courbould's Oscar-winning practical effects team (Ready Player One, Gravity, Gladiator).

A custom-made motion platform was created for the full installation version of Fly which viewers could mount and then put a headset on. Once they entered the experience, there’d be key moments in the narrative where taking flight could be experienced through multi-sensory elements. Like feeling the sun on your face, the wind coming at you or smelling different environments being flown over. Fly being in the MOR has allowed viewers to experience it beyond the physical installation version.

Common Ground is a VR documentary by Darren Emerson, about the regeneration of the Aylesbury Estate in South London. There’s cultural specificity about a piece like this, but it resonates with people all over the world. East City Films have done well in capturing the experience of people who have a stake in the redevelopment project.

Darren Emerson recently wrote reports as a VSI, with his colleagues and Tucker, looking specifically at how we could talk about Common Ground around the country to other councillors states and independent cinemas. Being part of this is just another step to getting more people to VR. Common Ground is a documentary about a place, its people, the homes that were built on that property, and the people who grew up there and are affected by it being torn down. The piece makes efforts to preserve these stories - the viewer can be in someone's flat, or on their floor in a composite version of the estate. There’s a spatial sense of the estate as you can hear what it sounds like in there. So even as the physical estate is disappearing slowly, its image has been preserved in the piece and what the Aylesbury Estate represents in UK history.

Darren Emerson shared how, as Aylesbury Estate is the largest such institution in London, the regeneration period has spanned over about 20 years. This has meant tearing it down bit by bit, and slowly displacing the people that live there, making it hard for them to find another affordable option. The documentary explores this regeneration, while also exploring the history of social housing in the UK.

“It looks sort of, like the disenfranchisement of the working classes in the UK. And really at its heart is an experience about community experience, about homes. And that's obviously quite universal. A universal thing doesn't relate specifically to London, it can, it can be anywhere.” - Darren Emerson