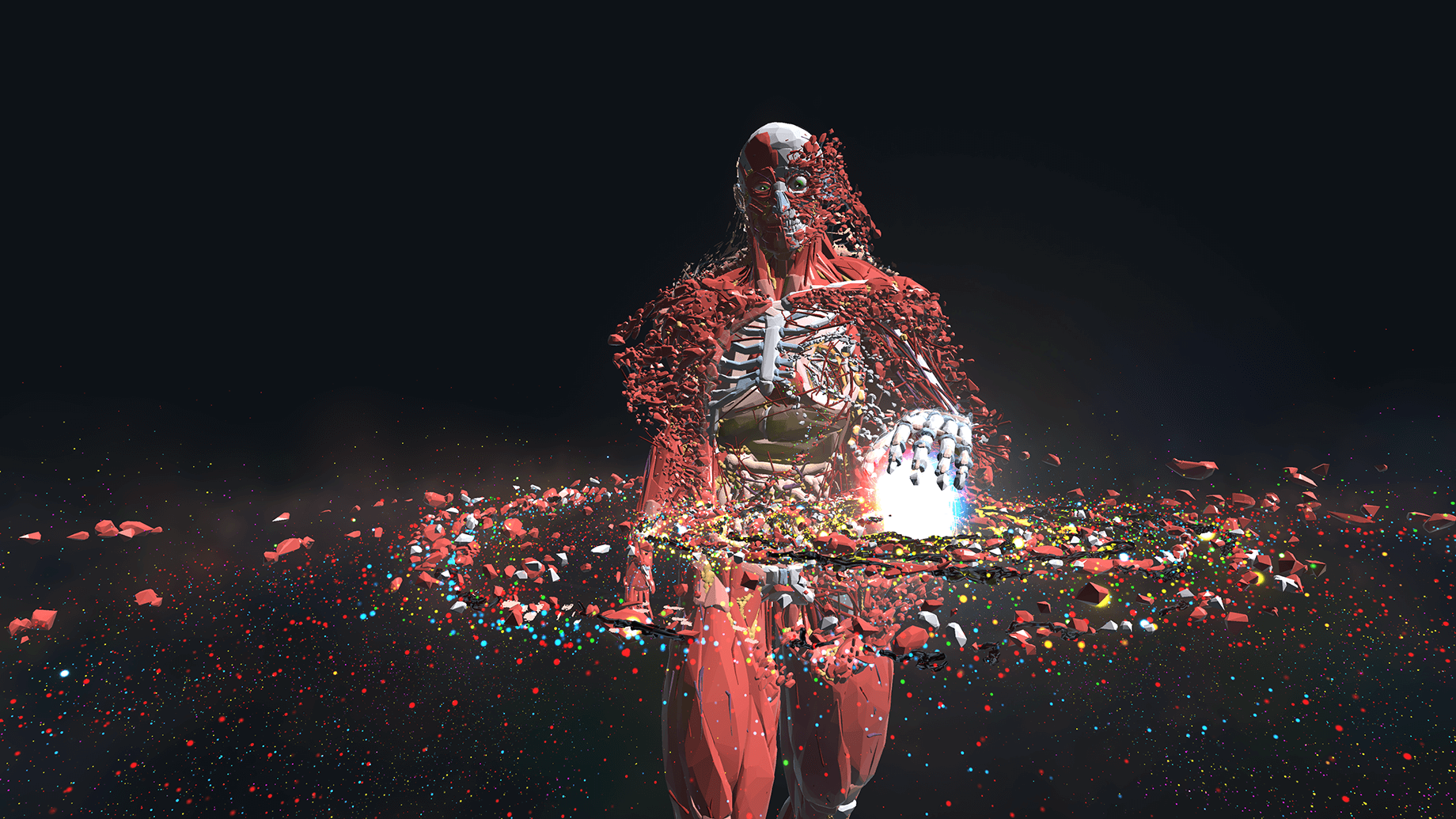 Having worked with companies like Unity, Tiltbrush, GoogleVR and others, Cesar Ortega is an artist passionate about creating and designing with virtual reality. In this week’s spotlight, Ortega talks about his experience working with VR art tools, along with the benefits and challenges that come with working in a new medium.

Although I studied Game Design I don't like to play games that much.

I am a 3D artist with a great love for VR. I have a Bachelors in Game Art and Design from the Art Institute of Fort Lauderdale in Florida. I started making art when I was very young, I take after my family, who have all been very accomplished artists in many disciplines, from music, painting to sculptures and more. I started drawing when I was very young, then moved to painting on canvas and then to digital illustration when I first moved to the US and got access to a computer, eventually I also picked up 3D modeling before officially starting my career. I love experimenting with visual styles and themes, as well as making epic pieces of art to inspire awe in my viewers.

What went into your decision to study game art and design?

At the time I believed it was the best path to learn how to make video games, though mostly it was about learning how to design and create assets that would go into games.

How did you get into creating VR art?

I was working at a studio doing traditional 3D work, a coworker came up to me and showed me a video of Glen Keane doing his famous Ariel painting in Tilt Brush. I was so captivated by the potential of VR I decided to get a VR headset of my own with Tilt Brush.

My traditional 3D art always had a focus on digital sculpting, this necessitated having a good understanding of shapes/forms and space which I believe directly translated to my success with VR painting since the same skill set and state of mind aid each other. I began making Tilt Brush sketches 3 years ago and I received a lot of support from the Tilt Brush team. This really motivated me to keep working and exploring VR, leading me to try out new applications like Gravity Sketch and eventually Blocks and all the others.

I use an ensemble of tools for creating art, for my traditional 3D artwork I use 3Ds Max, Vray, Zbrush, Substance Painter, Photoshop, After Effects and Unity. For my VR art, I use Tilt Brush, Blocks, Unity, gravity Sketch, Medium, and many others. The reason for choosing these tools I believe is arbitrary in most cases for the majority of artists, I believe most people learn tools that they encounter early on in their path and only find reasons to use others later on in the game, but they rather not switch because they are too knowledgeable/comfortable in what they know. In traditional 3D software there really aren't many limitations, most of the major tools can do it all, some are just slightly better than others. In VR is the opposite, most tools tend to only be good at one thing, due to the fact that they are still early in their dev cycle, the features are still limited, because of this I have learned and practice with most of them.

You mention that many artists don't switch tools because they're already comfortable with the ones they already use. Have you received any skepticism about VR tools from traditional artists/creatives?

I have received skepticism personally and I have seen much online as well, most people who haven't tried VR are still under the impression that it's either a gimmick or a fad, you will hear comments like "It will never replace <Insert industry standard>". It's impossible to convince people otherwise with just words when they have never tried it, when I can, I simply try to get people to use VR, most change their minds immediately. VR is an experience that cant be sold on paper, it needs to be experienced first hand.

Could you describe your creative process?

I tend to get inspiration from my peers, when I see someone doing great work it motivates me to do the same. It always starts with a vague idea, I try not to over detail it in my head or it tends to destroy the joy of exploring the development of the piece, the more I can improvise on the spot the better. The rest is a lot of work, I tend to enjoy the first 10% of a piece and the last 10%. The beginning is fun, you spend a lot of time setting up the visual style, it's rough, it happens quickly and it's new every minute. Then the next 80% is just a lot of rendering out the details, filling the gaps and trying to perfect the form, this is a bit boring for me. The last 10% is really fun, this is when the piece is mostly done and you want to add flavor to it, you can also try to be creative and add things on top to make it stand out. I basically enjoy the process of creating, not so much the process of building, I imagine I will enjoy it the most when we can conjure up images with our brains instantly through computer to brain interfaces.

How do you share your work? Do you usually intend for people to view your art on flat screens or in headsets?

Almost all my art is meant to be experienced in VR, I take great care in designing the space and how the viewer will experience the piece. This means that it does not always look the way I intended it to on flat screens which, sadly, is how most people experience it. But I don't want to change that. I feel these tools’ strengths are that you can build your work to be experienced in a way no other medium can.

‘The Peacock’s Tail’ by Ortega . Illustrated in Tilt Brush

What do you think is the future of VR art creation ?

I have always been very optimistic about the future of design inside VR. It really solves many issues that traditional mouse and keyboard inherently possess. The access to Z-depth in both vision and hand control in design can't be underestimated, it allows for a much easier time on tasks that are typically very time-consuming in traditional 3D like kitbashing, world building, rigging, animation, and set design. These are just the ones we have seen so far, I also predict that other things like retoping, hair grooming (guides), particle simulations with vector fields, and even foliage creation will also be made easier as more developers expand VR to cover more traditional 3D practices. Of course there are many challenges, VR, even though it makes these things easier mentally it does not physically, VR may never be as efficient as mouse and keyboard  when it comes to the body, the strain in your eyes/head/neck/shoulders can be a real struggle especially considering how time-consuming all these tasks are. Despite all the limitations I feel that we will soon see the potential truly flourish as more professional artists and studios pick up these great tools.

With that in mind, what needs to happen for these VR tools to become more prominent in creative industries?

Developers need to treat them like so and spend time/money getting it into the hands of skeptical artists/companies. I feel like they should find accomplished artists in their respective industries who are willing to try it and send them a VR system for a month and have them play with the tools. I was personally convinced to get my VR headset from just a video for the sole purpose of creating art, to this day the majority of my hours in VR are all on art tools, almost none on games. I have tried to bring the idea to some devs that try to cater their tools to a more mainstream gaming audience or in other words casual users, that when it comes to art there are no casual users, either someone picks up the tools and runs with them because they love them or they try them once and never use them again, which is to say I believe making them appealing enough for a casual audience doesn't mean that you will get many artists using the tool often, even if it seems like more people have tried it.

No better time than now, VR is not going anywhere and it's only going to get better. Don’t stress what tool to pick up first, find the one whose visual style speaks to you and just start using it. You can learn any of these tools in a couple of weeks or less.

Where can we find out more about you and your work?

You can find me on all social media @3Donimus, I am very active on twitter and my DM's are open, feel free to message me anytime. You can also visit my website at 3Donimus.com.

This interview is part of the MOR Artist Spotlight series, which features creators using VR as an artistic tool or medium of expression. Some of the artists’ work can be experienced in the Museum of Other Realities.