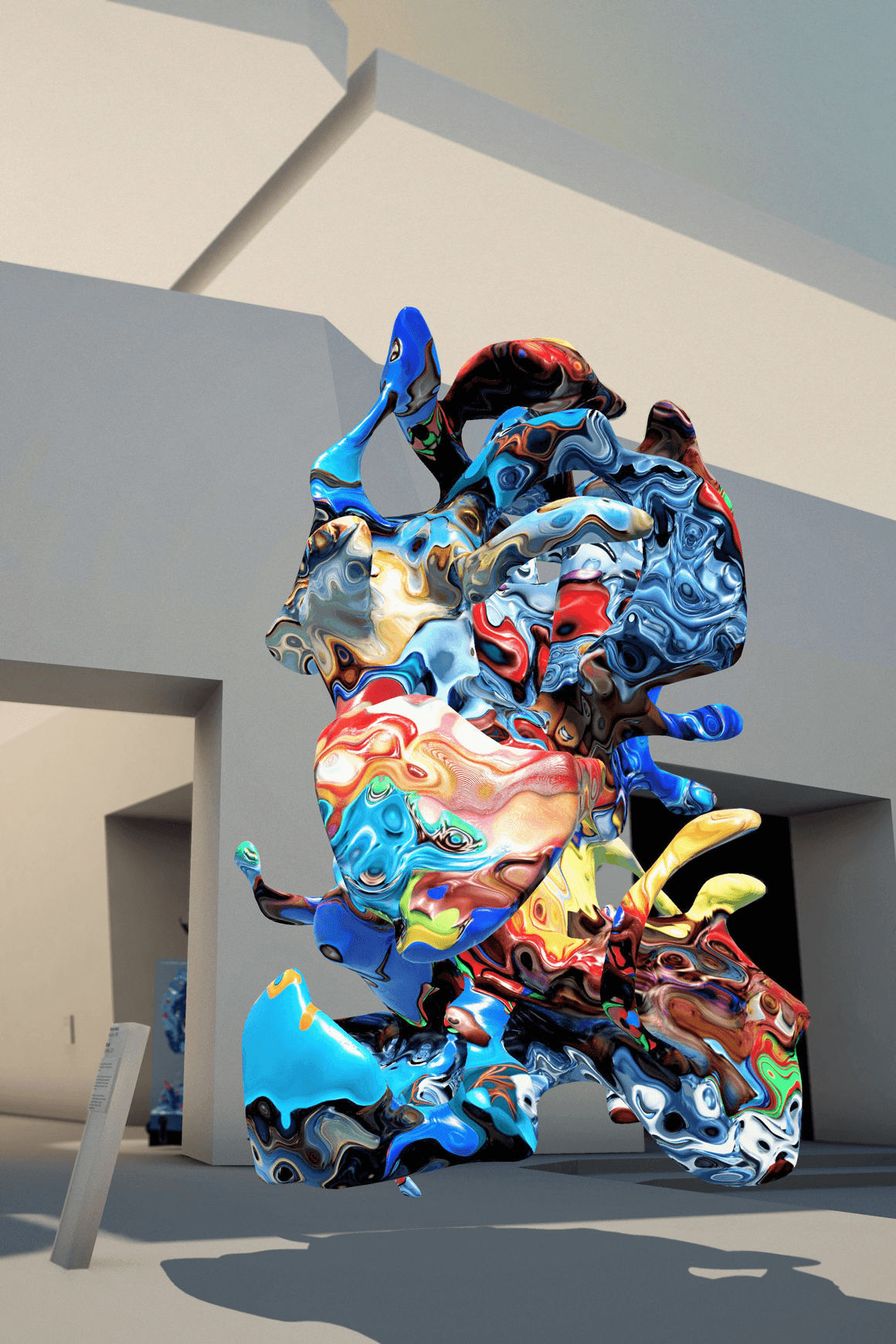 Artist and Academy Award winning visual effects pioneer, Kevin Mack received the Oscar for Best Visual Effects for his work on What Dreams May Come. In 2017,  Mack released Blortasia, a surreal maze full of colour and sensual undulating shapes, where players float through a calm world in virtual reality (VR), finding vistas of abstract beauty and moments of inward reflection. In this interview, Mack reflects on his creative process, expectations, and his thoughts on the future of immersive art.

All my life I’ve been devoted full-time to endeavors that are generally considered hobbies. Anything that could be construed as a hobby in my life is also an integral part of my creative process. I’ve often joked about it. I’m a professional hobbyist, it’s all I do, so in a way, I don’t have any hobbies. Kind of ironic, isn’t it?

In the ‘80s and early ‘90s, my wife, artist, Snow Mack, and I had a psychedelic art band called The Fringe. We wore our psychedelic painted clothes and played our psychedelic video art on TVs as we performed on stage. When the LA Weekly featured one of our live shows for their pick-of-the-week, they said, “Even if The Fringe’s eclectic brand of psychedelic music isn’t your thing, you’ve got to admit that their freaky-deaky clothes are pretty bitchin”.

I grew up drawing, painting, sculpting, and animating. My parents were Disney artists from the early days and I had lots of encouragement and lessons from them and their many artist friends. I studied fine art, illustration, and film at ArtCenter College of Design in Pasadena, California. After college, I supported my experimental art and music working in the film industry doing concept art, storyboards, models, stop motion, scenic painting, you name it. In the late eighties, I got into 3D computer graphics because I’d always dreamed of making virtual reality art and it seemed that technology was finally going to make it possible. The virtual reality thing turned out to be decades away, but I was in the right place at the right time and got to help pioneer the use of computer graphics for visual effects. I enjoyed a nice career creating and supervising visual effects for lots of cool movies and even received an Academy Award for my work on What Dreams May Come. Along the way, I got into neuroscience and artificial life and I kept making my personal art on the side. When VR technology finally became accessible to developers, I left the visual effects industry and have been focused on creating virtual reality art ever since.

How did you get into creating VR art?

In 1963, when I was four years old, I became fascinated by the Agave plants in my backyard. I was obsessed with their strange, otherworldly forms. One day, I experienced them communicating to me telepathically. I was immersed in incredible virtual reality visions that filled me with awe. The beings explained that they were The Ancient Elders From The Distant Future, and that one day I would help to create their ancestors.

That vision was the first time I became aware of the concept of virtual reality. It inspired my interest in consciousness, neuroscience, meditation, mysticism, dreaming, and the transcendent experience. It also inspired my interest in natural systems, evolutionary biology, artificial life and artificial intelligence. The first time I actually experienced VR in a headset was in in the late eighties at a short lived VR Arcade in Hollywood. It was terrible, but I could see the potential and it was incredibly exciting.

I’m really into creating my own tools and utilizing existing tools in unique ways that were never intended. I mostly create geometry assets with tools I make in Houdini, but for some stages I’ll do volumetric sculpting in 3D-Coat. I’ve explored VR creation tools like Oculus Medium, Tilt Brush, etc. and they’re really fun and have some undeniable advantages, but I still prefer the abstracted control and inherent capabilities of creating outside of the headset. I expect the VR tools will continue to improve, but there will always be advantages to both approaches. In my work, manual sculpting is only one element of the process. The procedural and rule based systems I create can produce great complexity more efficiently as well as allowing me to discover things I might never imagine. I use Unity to bring everything together and to build my behavior systems.

Could you describe your creative process?

My process is largely experimental. I like to explore ideas and processes without a specific goal in mind. I’m engaged in a constant search for novelty and my aesthetic ideal, which was likely formed by my visions, dreams, imagination, and to some extent, the sum of my experience. There could also be some aspect of it that’s genetically defined. Or maybe it was programmed in there by the Ancient Elder Agave plants when I was four.

How does sound fit into this experimental process and your work?

Music and sound design have always been an important aspect of my artistic practice. Virtual reality is the ultimate medium to realize my lifelong ambition of integrating my audio and visual art. For Zen Parade and Blortasia, I felt a relaxing neural entrainment sound bath would best complement the visual neural entrainment of the imagery. I experimented with some spatial audio elements, but it was both computationally expensive and too distracting for what I was trying to achieve. For Anandala, the addition of complex artificial life Blorts, with their musical language, the integration of spatial audio was essential. I created a new neural entrainment soundscape, then I spent months developing a musical language and the Blort voice module. The Blorts all have unique voices and styles of expression. They compose their own musical speech. I don't use any samples or predetermined phrasing. Developing their musical language was quite a rabbit hole, but I'm really glad I went down it. Hearing the Blorts express themselves in their own language is a most surreal and gratifying experience.


Let's talk about distribution. How do you exhibit or publish your work?

I've exhibited my work around the world at tech expos, conferences, film festivals, and art gallery and museum exhibits and events. Zen Parade is available on the Oculus Store and Blortasia is on Steam and in a bunch of VR arcades. Zen Parade has been used in a clinical study as a hypnoanalgesic to treat pain and anxiety during thirty awake brain surgeries. Blortasia is used in therapy and clinical studies are pending. Distribution is a bit of a conundrum for me. My work is abstract art, entertainment, therapeutic, a tool for neuroscience research, and some people use it in their spiritual practice. People of all ages and from all walks of life enjoy it and find it beneficial in a variety of ways, but that makes it challenging to know how to promote or distribute it.

There are a variety of expectations associated with different means of exhibition and distribution. Currently, one of the best things about VR art is that many people have no idea what to expect. That can be great because they experience the work in an open/receptive state. Of the different exhibiting contexts and venues, the art/science museum exhibits have been the most rewarding and enjoyable for me. Galleries and collectors are starting to talk about how to buy and sell VR art, so I'm eager to see where that leads.

With the video game distribution platforms, expectations have been more of a challenge. Those platforms were developed for commercial games with mass audiences. Expectations for price and game-based content can make distribution of VR art in those arenas somewhat frustrating. I'm hoping MOR will provide more visibility for VR artists and help establish an audience for VR art within that world.

A trailer for Mack’s Blortasia, available on Steam!

Where do you see the medium heading in the future?

The potential applications of VR are vast and broad, but I think it’s greatest potential may be as an artistic medium. The fundamental innovation of VR is the ability to communicate spatial presence. Throughout history artists and architects have used spatial presence to mediate our experience of reality. What’s exciting to me is the ability to mediate the experience of reality, unconstrained by actual reality.

What about access and reach? VR is growing in popularity, but it isn't quite mainstream. This means, at this point, only a handful of people (those with headsets) can experience your work. How do you feel about that?

In the several decades I waited for VR technology to be viable, I never thought much about VR becoming a mainstream industry. I wanted VR so I could transport myself and others into my virtual art worlds. I am beyond happy that I can do that now. In my experience, the best time to be doing something is before it becomes mainstream, while it's still new and exciting. I love that when people experience my VR art, it's often their first VR experience. Of course it will be great when more people can access VR art and VR artists can reach a bigger audience, but right now is a magical time. If VR becomes commonplace, at least some of that magic will be lost.

I’m still adding some embellishments, but I’ve started sharing previews of my latest project, Anandala. It’s a huge three-dimensional mandala of evolving shapes and colors that you fly around in and explore. It’s like a bigger, better Blortasia. The Blorts, my abstract, artificial-life entities, now have complex emergent behavior. They express themselves and interact with visitors and each other through complex movement, changing color textures, and their own musical language. They’re creative and very friendly. So far, people seem to really connect with them emotionally. I know I have.

Jump in. Experiment. Make something new. Find a unique style that reflects your own vision.

Learn more about Kevin Mack’s work on his website.

This interview is part of the MOR Artist Spotlight series, which features creators using VR as an artistic tool or medium of expression. Some of the artists’ work can be experienced in the Museum of Other Realities.