May 27, 2020
Spotlight: Isaac Cohen and the Telescope for the Mind
by 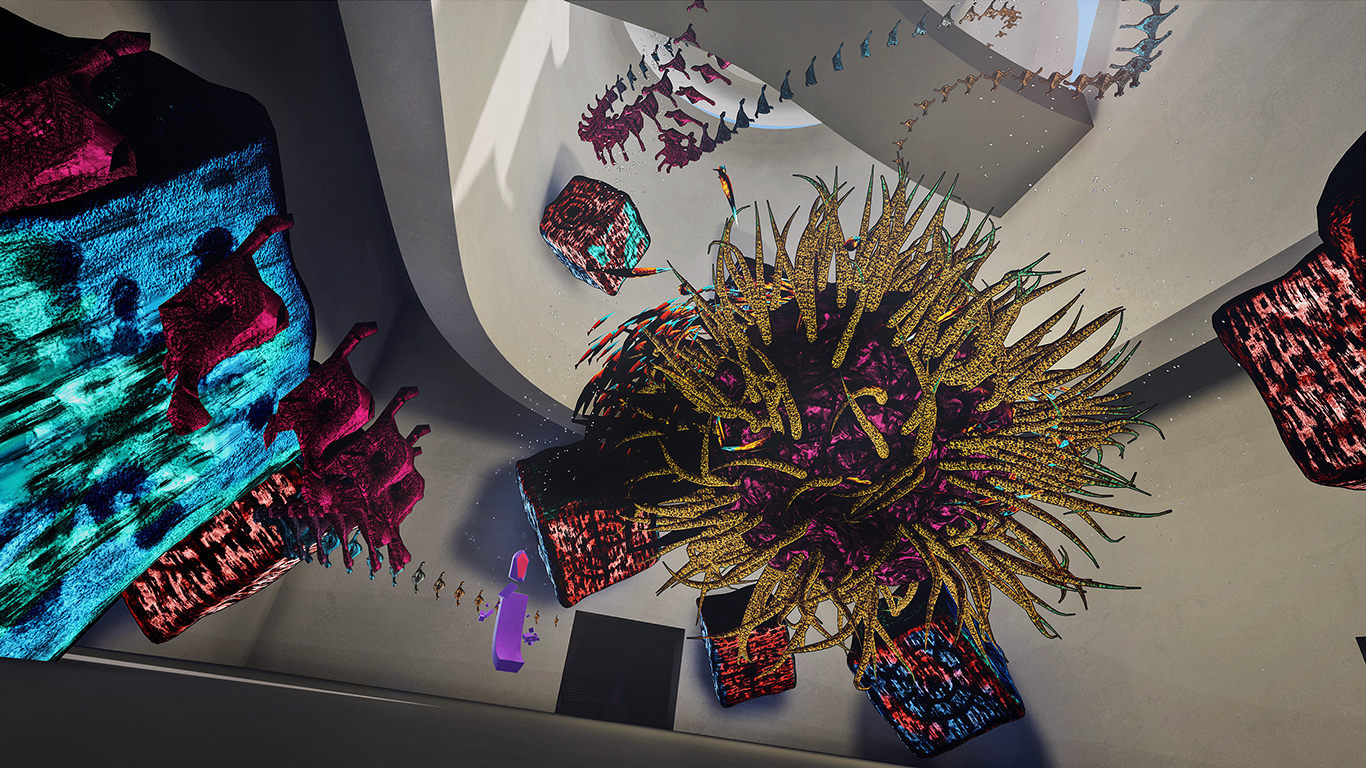 Often using the moniker ‘Cabbibo’ - a homage to the late physicist Nicola Cabibbo-- Isaac Cohen has been making art with computers for over ten years now. He studied Physics and Religious Studies after which he (naturally) found himself designing websites for friends. Soon after, he discovered 3DS (a 3D programming tool), and “ things started going crazy”. Since then, Cohen has published an eclectic array of works ranging from audiovisual fact-learning apps, interactive experiences made from recursive algorithms to a real-time procedural music blog where users traverse a universe of sound.

“I don’t think I specifically chose Physics to help me do art, it was much more a case of - my parents wanted me to get a real job. And Religious Studies was something I wanted to do because I was interested in Spirituality and Philosophy. These departments at my school were really interesting, so we were studying everything from Nietzsche to Buddhism.”

He just moved out to the coast of California to a town called Point Arena. Living close to the beach allows him to spend lots of time outside, which he says is an important part of his workflow.

“I like to think about how making artwork can be similar to how crystals form. You have a supersaturated fluid, but you also have to have everything else be there. And at some point in time, there’s an anomaly that a crystal forms around. You don’t really get to pick when that anomaly enters that supersaturated fluid. But you can, sort of, prepare the fluid for when that moment occurs.”

We asked Cohen about his first VR experience, and he shared with us about his time at Leap Motion. He had been invited into the Engineering Department and was in the company of some people he greatly respected. He recalls just staring at his hands and at the world around himself, and how moving it was. “I was really scared because I didn’t want to take off the headset for the people in the room I wanted to impress. I think I pretended to stay in there for a while. But yeah, I remember feeling like - oh my god, the future is so much more interesting with this ability to understand it.”

For Cohen, Math is the ultimate tool. He advises artists to invest in being mathematically sound. A lot can be unraveled from the base assumption that ‘1=1’ as a mathematical and realistic point of departure. It serves as the basis and allows any kind of creator to have a scaffolding that can later evolve into a magical, organic world. Cohen is a programmer, so for him, Sublime Text is an ally.

“A lot of my artistic processes are centred almost exclusively around the concept of using compute shaders. It’s a way in which I use the GPU on a computer. The GPU allows for much faster computation because it is paralleliz-able. Which means that my instructions have to be made paralleliz-able. I have been building this engine to help me do some of this for quite a long time. The fun thing about this engine is that it can take things that are inside that world and then link them to each other really easily.”

So if Cohen decided that he wanted to load a gooey mesh into a world he’s building, he can use that data to later do other things -- like put a bunch of hairs. Then using the tips of the hairs, a bunch of dandelions could be attached. Taking these big chunks and then linking them together starts being the thing that drives Cohen’s unique artistic expression. This linking of elements together allows for broad narrative juxtapositions and contrast - visually, philosophically, and story-wise.


For Immateria, Cohen's exhibit in the MOR, he worked through each element individually. He describes his computational process as making meaning actively through linkages and relationships between the elements. After each element has an identity of some sort, he begins to design interactions between them.

“That’s where for me the real complexity is -- computationally, code-wise, architecture wise. But that’s also when to me things start feeling luscious. And that lusciousness is the big thing that I have been going for.”

We also spoke about the future of VR as a medium, the hardware et al. Cohen feels strongly about how some frustrating practicalities that can limit a VR experience - an obvious one being comfort. Having a headset on your face can get annoying and uncomfortable, and then sweat can come and make things worse. One of the ways in which Cohen wants to think about it is such that something liberating doesn’t suddenly feel limited. VR tech ought to seek out practical ways, such that the strength of a VR experience or story gets served, allowing people to be able to tear up in VR without the experience getting ruined immediately.

“From a sort of larger perspective, computers are described like bicycles for the mind. And I think VR works like a telescope for the mind. It can take a thing that is far away and not at human scale and sort of transport it and make it at human scale. So I like how it can be used to do things that are impossible or things that you do not get to do in any other medium. These things are the most liberating for me. Like flipping gravity, using impossible colours [and] doing impossible shapes.”

Another larger narrative piece he shared the concept of was one where his love for computers is at the forefront. A scientist gets trapped inside of a computer and starts to discover life forms that live inside the computer. She begins to explore these worlds and gains an understanding of loneliness, connection, the concept of epiphany among other fun, spiritual emotions. “Stylistically I wanted to go along a vein where the computer is a mystical object. Our tendency with computation is to see a computer as a rigid, structured piece of technology. And that comes in the way of it being considered as a tool for self-expression. Perhaps, messy self-expression?”

The first one I wanna talk about is a NEW DONUT! https://t.co/WhIG4cwWO1 pic.twitter.com/gZMXnteuVt

Finally, we touched upon music and sound design -- given how much they are integral to Cohen’s work. He told us how he grew up playing a lot of instruments and still happens to make a lot of music. Sound being so present in his life makes it come into play quite organically. “It’s part of the supersaturated bit of the workflow. Like I am going on a two-hour-long walk in the middle of the wilderness and then next thing, it is what is framing the way I am thinking. Like if I need to write, I always put on sad music. And so I may not be specifically thinking about what the audio track is, as I might be aware of the emotion it creates. So I guess it is with me pretty early on -- maybe way before I know what I am going to do.”

A lot of people describe Cohen’s work as psychedelic -- which he doesn’t agree with. It’s how a certain implication comes with that description, and what it then says about creativity in a way that discredits artistic skill that he doesn’t align with. But at the same time, he adds, “psychedelic implies very little constraint and it is very noisy and decadent. And like that, overwrought. In my mind, those are the parts of my art that I see, and I am constantly trying to work on and restrain.”

Cohen hopes that his work is noted for its handmade quality and all its humanity as it explores vulnerability. It’s hard to negotiate that space for artists - that tension between creating within restraints and creating with vulnerability. Cohen seeks out that tension as it sort of allows for his work to be more palpable. “One can only offer finesse and dignity -- but that at the same time is antithetical to the vulnerability of just like 'this is me'. And me is messy, like humans, in general, are messy.  If you try to cut all the edges off of that messiness, you do not get to see the humanity of it. So I think I would love it if my work was described as luscious and hand made, and human. That would be the dream.”