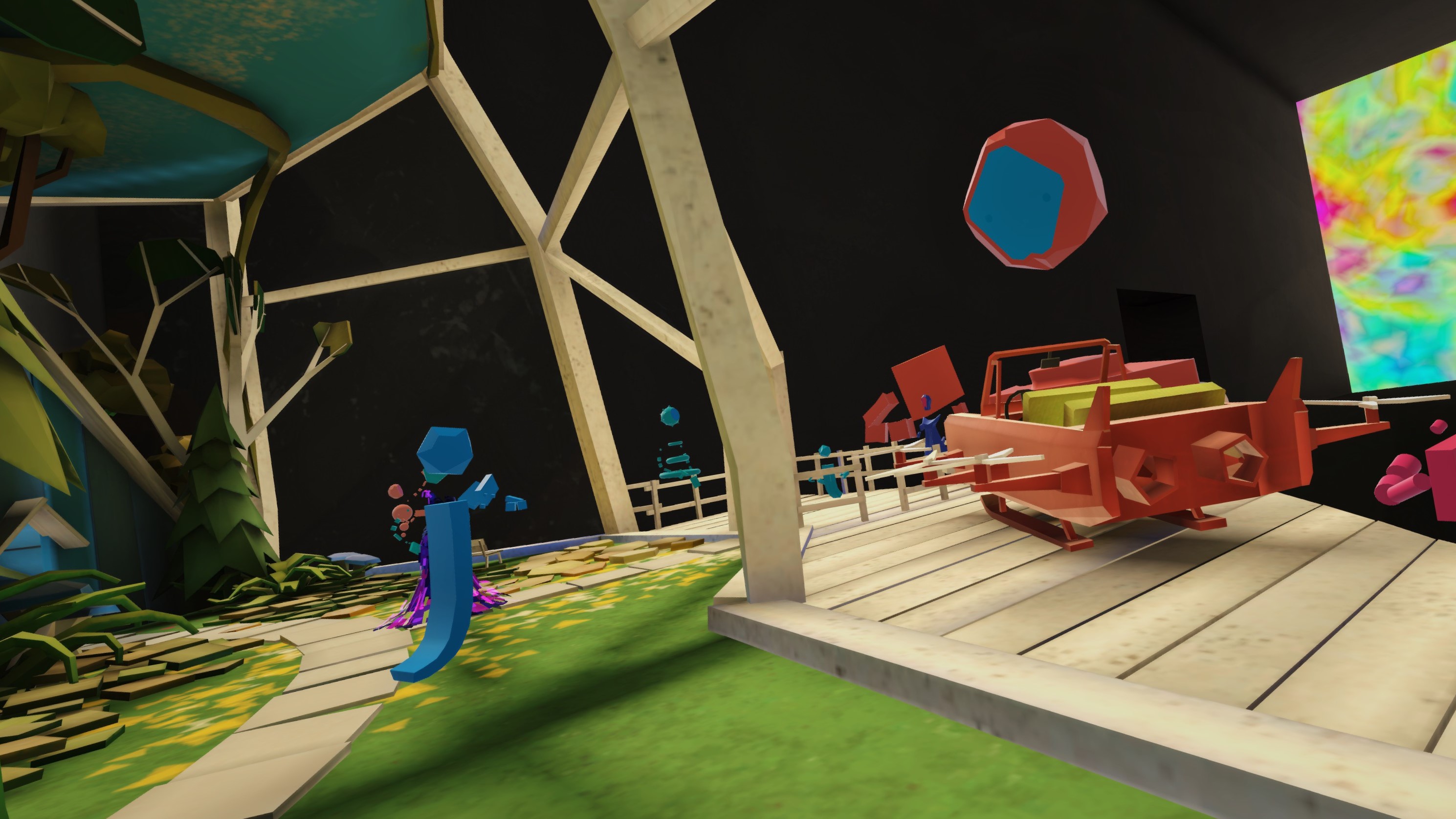 Durk van der Meer hails from Groningen, Netherlands. A painter and digital artist, he graduated from Academie Minerva, Hanze University with rigorous and traditional training in visual art. As a self-taught 3D artist, he has a striking body of work and a wealth of experiential loot from his time and toil in architectural visualisation and the animation industry. Some early work includes projects with Happy Ship -- a company in Groningen - where he assisted on Polska Warrior, an animation project that received a Golden Calf. For the last seven years, he has been an independent freelancer, bringing game engines such as Unreal Engine and Unity Engine into his workflow. When we asked Durk about his finding his way into VR, he made it out to be as simple as buying his first VR headset, the Oculus DK1.

“I had this scene set up, of a house... kind of like a demo project. And I was able to walk through it in VR! It was the first version and so the resolution was not very good and my video card couldn’t really handle it. But still, the sense of being there, and having an accurate sense of scale - it was a real treat as a first experience”.

We asked Durk about what he thinks might still be traditional skills or prerequisites for creators of 3D art as more and more of them make the transition to VR tools. He felt that more than skills, it’s the manner in which tools are being wielded that is challenging tradition - “The manner in which VR tools are being employed to create art in 3D for sure has taken a non-traditional turn. Like when you see the Quill sculpts or [work made in] Tilt Brush, they don’t have UVs and they don’t have standard materials. In Quill, you have to paint your own lighting. And that is what is so cool about it. It gives you the challenge to lend what you create in VR its own personality.”

While creating the Terrarium, a work made for the MoR, Durk wanted the piece to not just draw people into the space as an artwork but become a place to hang out in. In many ways, Durk’s professional background in level design is what shimmers in the Terrarium as he really makes room for his viewers. In a stylized but traditional sense, the Terrarium is expecting guests. An asymmetric dome from the outside, with quarters separated by walls, walls adorned with art and technological gadgets and media - it wants to wow you. It wants to somewhat belong to the real (estate) world. The plants, the furniture, the coziness - as mere details they may challenge notions of functionality and space, but they are nevertheless contained in known notions and are situated in a realistic sensibility. There are signs of everyday life in the Terrarium, even if in the lack of a homeowner or a host. The place is tidied up, well-pruned and made hospitable.

“I cannot really explain why, but I always had this fascination for terrariums. It is the same fascination you have when you are peering into a dollhouse. You want to see yourself in it. You kind of project yourself into the space. And of course the cool thing with this piece came with the fact that the MoR has the capability to allow teleporting and re-scaling”.

The scale of the surroundings in the MoR and other people as they explore the Terrarium from the inside and the outside is able to privilege a sense of relational space. At the opening event, there was an illustrious moment when five tiny visitors were just having a conversation inside the work. And there was a big guy on the outside, sort of like the rare friendly giant we know from the movies - just bending down and looking into the terrarium. That perspective, even just watching this giant peering in - it was kind of cinematic in just the way that Durk intended it to be.

Terrarium was made with Google Blocks which Durk likes to call it the “MS Paint of VR modelling - a simple but intuitive tool with a basic set of options, Google Blocks really lets the maker focus on building”. Modelling it using Google Blocks allowed for the irregular shapes that characterize it, modelling which isn’t as easy or fun in actual 3D software. The processing, although, did happen using 3DS Max. “I could see then if there were some issues with the geometry. Usually, it is pretty clean, because when you come from Blocks you do not have to worry about flip normals or anything like that”. Then he had to unwrap the UVs and take it into Substance Painter where the materiality was brought in. The combination of low-poly 3D art in Google Blocks and the touches with Substance Painter have really opened up a style that Durk shows an appetite for.

“A lot of traditional art does end up in VR though. And that is just true for art and games. As people have a skill set built before the new technology comes. And then they import as much of the skill into the new technology. But of course, the truly exciting stuff in VR is stuff you couldn’t use or even have thought of before. Stuff that is not possible without VR.”

An interesting discussion came up in our interview with Durk, about prototopia. He spoke about how images that we create through movies, comics and literature most often suggest a dystopian future and unfortunately that’s what abysmally sticks around. “I realized that there are very few science fiction movies presenting a world that I’d want to live in. And I do not think that these worlds are just for entertainment as they do get stuck in our heads”. They reflect a kind of dread in their foresight. And so we rely on these images from a futuristic perspective, and we need somewhere technology can still coexist with nature, without harming the planet. One where technology and the planet are not at odds with each other.”

To create worlds that are just beautiful - let’s not rush to think of it as too optimistically wishful or oblivious. Visual artists and storytellers could heed this suggestion - as a world without a grave idea to ground itself could exist to make a larger point about sustainability. Durk explains what he means through his love for architecture. Having lived in Holland, Durk embraces the 70s minimalism prevalent in the architecture there, appreciating it for its sustainability. “If you go through the city and you look at these buildings and ask yourself - Which buildings might still be here 300 years from now? - the answer might be, the oldest ones. The ones that are already 300 years old”. And he adds how that isn’t because of how these buildings have stood the test of time but because of the fact that we have found reasons to cherish them through meaning-making. We have read into these images deeply and owned them through cultural deliberation. Why aren’t we creating buildings (and images) then that we hope to keep around for another 500 years? Despite the evidence, we have that proves this to be technically possible? Durk hopes to bring forth this manner of thinking into his future projects as well.

Maranga - a virtual world he has been building for about two years is a VR park that features in the living room of the Terrarium. It is a project which he hopes to turn into a multiplayer social VR experience. ‍

“Most of the VR things that I have made end up in Maranga. And it’s also in the same style as the Terrarium- using Google Blocks and Substance Painter workflow. I guess it is a little bit more fantastical. I’m really excited about releasing that soon”.

While Durk retains his love for 2D art, he did confide in us how good it feels to escape the boundaries of the two-dimensional image. This shift is nearly as significant as the collapse of the ‘fourth wall’ for cameras, if you will. With Durk’s interest in space, sociability, and sustenance we think of him as a storyteller toying with what a story can be, if told spatially. Immersed engagement has largely relied on story structures before, but now embodied immersion in virtual reality is altering the promise of a story - with an unprompted, non-traditional structure. With shifts in the nature of content out there for the digitally savvy viewer to engage with, one new outcome has certainly been how the performance of the process of making VR artwork has become the artwork, in part. Like film viewers learned how to feel physically embodied through the moving camera, VR environments, games and experiences are going the full stretch to bring the makers perspective closer to the viewer's perspective.